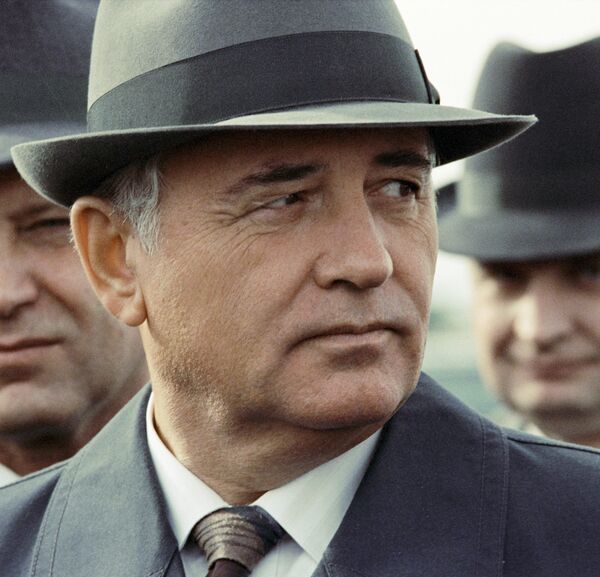 © RIA Novosti . Boris Babanov
/
Go to the photo bank
Subscribe
Twenty-five years ago today we first heard the word "perestroika." Mikhail Gorbachev used the term (which literally means "restructuring" in Russian) during a conversation with residents of Togliatti on April 8, 1986.

Twenty-five years ago today we first heard the word "perestroika." Mikhail Gorbachev used the term (which literally means "restructuring" in Russian) during a conversation with residents of Togliatti on April 8, 1986. Historians will point out that, in fact, Gorbachev had already used the term in an official context a month earlier during a speech at the 27th party congress. But in that speech he used the term in reference to the party's personnel policy - not exactly a riveting subject. In Togliatti, that magical word "perestroika" was used to signify a new direction for the country. It was in Togliatti that the word first struck a chord with the Soviet people.

Soon after, a pamphlet containing Gorbachev's speech in Togliatti was widely published throughout the country, which attests to the significance of the event. There was something vaguely Chinese about the title: "Restructuring faster, acting in a new way."

In the beginning, there was the word. Actually, there were many new, vigorous-sounding words - acceleration, democratization, socialist self-government, glasnost (openness), new thinking, intensification, etc. These high-minded words, which litter the pages of dusty old newspapers, now sound utterly naive. They are as sad as faded paper flowers in a graveyard. Now, 25 years on, we can see the futility of the Soviet leadership's attempt to find a magic word to turn water into wine and oppression into freedom. We Russians know the value of mere words.

The Chernobyl nuclear plant exploded just two weeks after the Togliatti speech. Then the Admiral Nakhimov sank, killing 423. Two trains were destroyed in a huge fire near Ufa. Conflicts flared up in Karabakh and Fergana. And Spitak was razed to the ground by an earthquake, as if man-made disasters were not enough. The young, audacious West German Mathias Rust mocked the mighty Soviet military by landing a single-engine plane on Red Square. The country began to break apart like Arctic ice in the summer, destroying the hopes and futures of its people. Perestroika, the doomed attempt to rebuild the Soviet Union, ended up dismantling the country's iron framework, which, though old and rusty, still held together its territories and peoples. Words and incantations could not conjure up a new one.

Perestroika led to the collapse of the Soviet Union. Was that an unintended consequence, or was that the plan all along? Opinions vary even now, 25 years later. The father of perestroika recently turned 80, and the publicity only added more fuel to the fire. Polls showed that half of respondents see Gorbachev as the Chekhov character who unthinkingly removes a spike from the train tracks, while the other half sees him as a villain bent on eradicating socialism since his youth.

Gorbachev was not an evil genius. Let's recall a statement he made in April, 25 years ago: the Volga Car Plant must set the trends for the global car industry to follow. But when he asked for a more accurate picture of the state of the Soviet economy, academics and his advisors told him that the USSR was 15 to 20 years behind industrialized nations in technological, scientific and industrial development. How could the Soviet Union overtake them?

Or recall his endless references to Lenin's obsolete words in an attempt to resolve the most vexing issues of the late 20th century. The country was crumbling around us, and our leaders were busy scouring the party's history books in search of just the right quotation. They were as happy as children when they found it: we are on the right track to socialism with a human face; we have not deviated!

Nothing in Gorbachev's life, education, or career could help him make perestroika a success. He frantically searched for the right formula - from Lenin and Marx to European communists and socialists, from Lenin's New Economic Policy to the Prague Spring. Then U.S. Secretary of State and former Treasury Secretary James Baker recalled that during arms-control talks, the Soviet leader brought every conversation back to the economy and asked Baker general questions about the laws of the free market for several hours. Gorbachev had an unbridled curiosity. Curiosity is not a bad quality, nor is enthusiasm, idealism, or a propensity to dream. They are understandable and even attractive qualities in individuals, but when it comes to government policy...

The anti-alcohol campaign, the promise of a separate apartment for every family by 2000, the popularity of NTTM (youth scientific and technical endeavors) and discussion clubs, the immensely popular television program "Vzglyad," stone-washed jeans from cooperatives, Nikolai Bukharin's rehabilitation, and an appearance by Alexander Yakovlev, a prominent ideologue of perestroika, at a concert of Nautilus and the Scorpions in the Kremlin - in all the outward bustle of perestroika, no one could see the main thrust of the project. (By the way, the list continues to this day: the introduction of energy-saving lamps; changing Russia's time zones; renaming the militia the police; the president's meeting with rock musicians...)

The famous Soviet rock group Kino captured the mood in the country the best: "Our hearts demand a change..." We should acknowledge that in the 1980s Gorbachev was closer to the people than any Russian tsar or leader had even been. He shared the feeling in all of our hearts: we cannot go on like this. But why did a member of the Politburo, who was guaranteed a comfortable life till the day he dies, arrive at the same desperate conclusion as ordinary Soviet citizens? They say the change in Gorbachev happened during a trip to Canada, where he saw farms and other bounties of "decaying capitalism." As the youngest Soviet leader, he hadn't lost his capacity to be surprised, to compare and to see what was right before his eyes. He was shocked by what he saw. This is quite a convincing story. French actress Marina Vladi recalled how her husband, our famous bard Vladimir Vysotsky, was also shocked when he saw the abundance of sausage during his first trip to West Berlin.

You didn't have to go abroad to experience this shock - the undeniable feeling that the Soviet Union was stuck in a dead-end. Then a budding reporter, I was shocked by what I saw at the railway station in Chita, where a crowd had gathered for the arrival of a special train carrying our beloved Leonid Brezhnev. When the train arrived, he disembarked with difficulty, looked around and walked away from the crowd. The local leaders, bearing bread and salt to welcome Brezhnev, were taken aback. After a moment's pause they rushed after him. They ran ahead of the leader along the edge of the platform so that they could welcome him, out of breath, by the last carriage.

Indeed, it was impossible to go on like that. This was a rare case in Russian history when the leadership and the masses were unanimous in their opinion. This is why the word "perestroika" unleashed such deep, tectonic shifts in the country. They were so destructive that they buried for a long time our obvious achievements and sound ideas; decent notions like democracy, glasnost and freedom became dirty words in post-Soviet Russia.

"Parole, parole, parole..." In that classic song French singer Dalida teaches naive girls not to trust sweet, enveloping words. It's sound political advice, too. Beware of dazzling and meaningful words that open, with the ease of a can-opener, the souls of those longing for something else! These words can change your life, the moral compass of an entire country, not to mention its borders and the entire world order.

In hindsight, is easy to reproach Gorbachev for his lack of foresight, his propensity to rush from one slogan to another. He can be criticized for looking for a way out of the dead-end where it was brightest, under the streetlight of socialism. He can be charged with wasting his priceless capital - the enthusiasm and support of the millions of his compatriots. This is fair criticism. But when I think back to the spring of 1986 and the perestroika years that followed, I feel this longing to return there and make one more try, like in Andrei Tarkovsky's film "Stalker."

Strange though it may seem, when the state was collapsing around us and the rug was pulled out from under our feet, we still entertained the hope and even the conviction that we'll make it, that we'll heal the wounds and live in a new country after perestroika. I don't know about you, but I miss that conviction dearly.