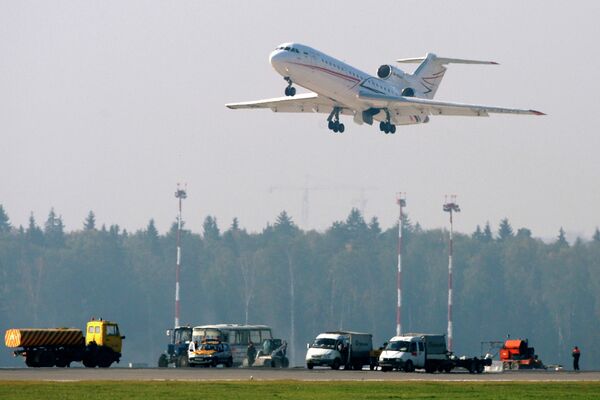 On Tuesday, the economic policy committee of the State Duma, the lower house of Russia's parliament, submitted a bill intended to amend the legislation on competition and natural monopolies in Russia to limit the maximum share of any airline on the domestic market to 25%.

It also instructed the competition watchdog to work out common air ticket pricing criteria for all airlines and admit foreign companies to the domestic market, if the demand for air tickets exceeds supply, the paper said.

The amendments to the legislation may be approved by the State Duma by the end of 2011.

There are currently no local airlines in Russia with a domestic market share of over 25%. Russia's flagship airline Aeroflot accounts for about 15% of domestic flights followed by UTair with 13% and Sibir with 12.5%. Aeroflot claims, however, that the bill in its current form may jeopardize the company's plans to become a global Russian airline.

"These amendments, after Russia's accession to the World Trade Organization, will not allow Aeroflot to compete with the world's other largest airlines," Aeroflot told the paper, adding that the airline had transported slightly over 11 million passengers in 2010 compared with the annual passenger flow of Lufthansa or Air France exceeding 50-60 million people.

"In their countries, they hold up to 60% of the market of air carriage but no one would venture to say that there is no free competition in France or Germany," Aeroflot told the paper.

Russia's Federal Anti-Monopoly Service has said it is not against the bill but added that it had not taken any part in its development. The competition watchdog also said that the country's regulatory base had to be improved to resolve the problem of prices on domestic flights.

Andrei Golushko, deputy chairman of the State Duma committee for economic policy and the author of the bill, told the paper that the absence of the necessary regulatory base for aviation business was the cause of "unhealthy competition on the market of domestic flights."

"Our analysis indicates that prices soared 50% last year on domestic routes serviced only by one airline while prices on the routes where several air companies were present rose only 8%."

"As for the proposal by deputies to admit foreign airlines to the domestic market, this will simply kill the business of Russian air companies, which is unprofitable already today," he told the paper, adding that the move contradicted the Russian Air Code and intergovernmental agreements.