Can the CIA take out Gaddafi? 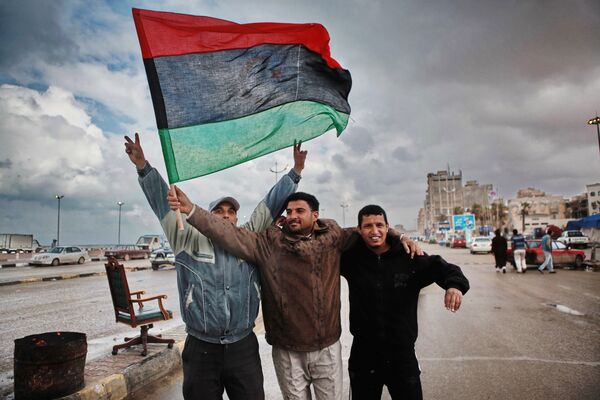 © RIA Novosti . Andrei Stenin
/
Go to the photo bank
Subscribe
There is little doubt that the CIA could take out Gaddafi. So why haven't they?

There is little doubt that the CIA could take out Gaddafi. So why haven't they?

According to sources in the Obama administration, President Obama has signed a "presidential finding" authorizing covert support for rebel forces seeking to oust Libyan leader Muammar Gaddafi. Whispers that CIA agents will be sent to Libya to size up the rebel forces call to mind the cloak-and-dagger operations of a bygone era. The intrigue is irresistible.

To kill or not to kill?

The Company (as CIA employees refer to the agency) has everything it needs to assassinate Gaddafi. The CIA could carry out the "executive action" ("assassination" in agency lingo) through intermediaries, cover its tracks, and let the world wonder if it had a hand in Gaddafi's demise.

There's one problem with this scenario: President Gerald Ford signed Executive Order 11905 in March 1976, explicitly forbidding U.S. government employees from engaging in or conspiring to engage in political assassination.

In the 1960s and 1970s, the CIA used its license to kill to take out Lumumba in Congo and to make an attempt on Fidel Castro, for example. This caused a huge public backlash, forcing President Ford to sign the executive order.

Although presidential orders are not technically law, they are faithfully upheld, even if some people are convinced that such legal obstacles have never prevented the CIA from doing what it wants.

They are wrong. The U.S. political system is structured so that any breaches of protocol become public knowledge sooner or later. This can result in resignations, ruined careers and even time in prison. At the very least, there is the threat of having to testify before Congress's intelligence committees.

Such secrets cannot remain secret forever, even in an inherently secretive institution like the CIA. There will always be disgruntled employees who are willing to leak secrets. And since the presidency and the Congress are usually held by different parties in the United States (including right now), there are always plenty of people digging for the truth.

Few government officials are willing to overstep their bounds or break the law, if for no other reason than political survival.

Americans give their government extraordinary powers only during times of emergency, such as George W. Bush's post-9/11"war on terror." Bush signed an order authorizing the CIA to kill terrorists, including Osama bin Laden, several months after the deadly terrorist attacks.

But I doubt the Company has been trying very hard to kill bin Laden. He is the perfect symbol of universal evil, and a useful pretext to justify all kinds of shady, quasi-legal operations. If anything kills him, it will most likely be a 1,000-pound bomb from the sky, not CIA operatives.

As for Muammar Gaddafi, he is not on any terrorist list, and the CIA has been working with Libya's intelligence service since Libya returned to the fold of the international community in the early 2000s. CIA employees acknowledge off the record that Libya had supplied them with vital intelligence about terrorists, al-Qaeda and other Arab "bad guys" until fighting broke out in Libya in February 2011.

A man who could tell us a lot about Libya's cooperation with the CIA is Musa Kusa, the 64-year old foreign minister. Kusa, one of Gaddafi's closest advisers and a former spy chief, has defected to Britain, and says he no longer represents Libya.

Considered the most influential Libyan official outside the Gaddafi family, Kusa started brokering ties with the West in the early 2000s.

Now that such a high-profile official has deserted Gaddafi, people around the colonel may start to think the colonel's days are numbered. Lower-ranking officials can be expected to follow in the foreign minister's wake.

By law, the CIA requires special permission from the president to carry out activities designed to influence foreign events. President Obama allegedly signed such an order in the past two or three weeks, and it is safe to assume that CIA agents were in Libya before the coalition started bombing on March 19.

In addition to guiding air strikes from inside the country, the CIA needs to gather intelligence on the identities and capabilities of rebel forces in Libya. House Intelligence Committee Chairman Mike Rogers said: "We know what they're against. We don't really know what they're for." The congressman said they are not sure if Islamists make up 2%, 50%, or even 80% of the rebel forces.

CIA agents in Libya will likely do more than collect intelligence. Washington is arguing that it is authorized to arm the rebels under UN Security Council Resolution 1973, as it overrides Resolution 1970, which imposes an arms embargo on Libya.

This could mean that CIA agents will arm and train rebels as well as supervise, and possibly command, their military operations, although the White House has denied this. After all, only military instructors were sent to Vietnam initially.

But the Obama administration is denying the possibility so vigorously than one can't help but think of that British saying: "Never believe anything until it has been officially denied."