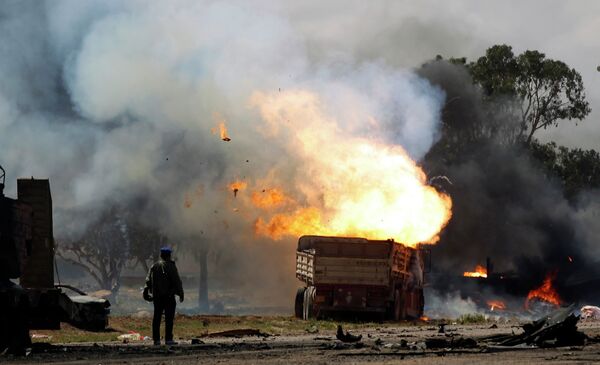 Russia was not invited to a meeting in London on Tuesday to draw up a common approach towards Libya, where Western forces have become embroiled in a military campaign against Colonel Muammar Gaddafi.

Russia was not invited to a meeting in London on Tuesday to draw up a common approach towards Libya, where Western forces have become embroiled in a military campaign against Colonel Muammar Gaddafi.

Along with all members of an international coalition involved in the operation, representatives of the United Nations, the Arab League and the African Union are attending the conference.

Although initially critical of military intervention in Libya, Russia, one of the five permanent members of the UN Security Council, abstained from a vote to impose a no-fly zone on Libya.

But as concerns mount, instigated by Libyan state media reports, that allied attacks may have resulted in the deaths of civilians in Libya, along with allegations about the coalition coordinating its actions with rebels, Moscow has turned up its rhetoric on Libya.

Russian President Dmitry Medvedev stressed last week that preventing civilian deaths was an "overriding priority" for the international community in Libya, while Foreign Minister Sergei Lavrov urged the coalition on Tuesday not to go beyond the provisions of the UN resolution.

Russian Defense Minister Anatoly Serdyukov has urged an immediate cease-fire in Libya, describing political dialogue with Gaddafi as "the only way to protect civilians," but analysts say this is not a real alternative to the NATO-led military operation.

"It is very hard to imagine both Gaddafi and the rebels agreeing to a cease-fire, because neither of the sides has reached its goals," says Oksana Antonenko of the London-based International Institute for Strategic Studies. "Besides, Gaddafi's legitimacy as a participant in such talks is also a question: France and Britain have openly said that they don't recognize him as a partner for negotiations."

Currently, the international community is split into three camps on the Libya issue. The first group supports the no-fly zone, but is unwilling to take the intervention any further. The second proposes supplying arms to the rebels to hasten the fall of Gaddafi's regime.

At the moment the NATO-led coalition is holding the middle line, which is to continue attacking Gaddafi forces in order to not let him restore his defense potential and regain the rebel-held territories, while refraining from directly supporting rebels.

U.S. Ambassador to the United Nation Susan Rice said on Tuesday the U.S. administration has not ruled out providing military support and arms supplies to Libyan rebels. In an interview on ABC's "Good Morning America" show, she said the U.S. goal was "squeezing Gaddafi's resources and cutting off his money, his mercenaries, his arms, providing assistance to the rebels and the opposition."

"If this uncertainty [over Libya] continues, tensions within the coalition will increase further because many of those involved in the coalition do not intend to participate in it in a long-term perspective," Antonenko said. "Here, I believe, Russia may play an important role by cooperating with those countries whose positions are close to its own, such as Germany and Turkey."

But other experts say Russia should give the Libya issue a wide berth.

"It's good that the London conference is taking place without us," said Yevgeny Satanovsky, who heads Russia's Institute of the Middle East. "Decisions will be made there that, fortunately, will have nothing to do with us, because it's already clear that they will not lead to anything good."

"We are not interested in this neocolonialism in the Libya case, we are not dancing at this marriage, and this is our conscious choice, which, in my opinion, is more than reasonable."

But others say Russia cannot simply limit itself with official statements over the operation in Libya.

"Given Russia's importance and its permanent membership at the Security Council, countries like the United Kingdom will always want to consult Russia and take its point of view into account," said Richard Dalton, an associate fellow at Chatham House, a London-based think tank.

"Although in the short term Russia does not have a very large role in resolving the Libyan crisis, it's possible that as matters develop, there will be more interest in the ceasefire, which is the objective of the resolution."