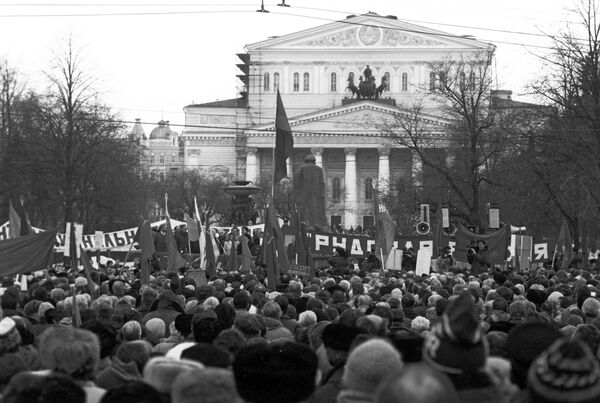 The Soviet Union’s first, and last, referendum was held in the USSR on March 17, 1991 at the initiative of its first, and last, president – Mikhail Gorbachev. The Soviet people were asked whether or not they want to keep the USSR, at least that’s how it seemed at first glance.

The Soviet Union’s first, and last, referendum was held in the USSR on March 17, 1991 at the initiative of its first, and last, president – Mikhail Gorbachev. The Soviet people were asked whether or not they want to keep the USSR, at least that’s how it seemed at first glance.

In recent years quite a few myths and legends have sprung up around this event. Today, politicians actively use it in increasingly popular historical and political discussions of the nation’s recent past. Advocates of the USSR, mostly people with left-wing or socialist views, maintain that the government ignored “the will of the people” by disintegrating the Union. This view has some basis in fact, after all, however you look at it over 70% of people who voted in the referendum voted to retain the USSR.

Its opponents, mostly people with right-wing or liberal views, claim that many people did not even understand the question, whereas others voted against upheavals that were already inevitable at that point. No referendums could have prevented them. These statements are also not unfounded.

First, the question put before the people was phrased in a highly convoluted way: “Do you consider necessary the preservation of the Union of Soviet Socialist Republics as a renewed federation of equal sovereign republics, in which the rights and freedoms of persons of all nationalities would be fully guaranteed?” It is really difficult to grasp the gist of this complicated sentence. It is also somewhat akin to asking: “Do you think it is better to be rich and healthy?”

Second, the supreme authorities in the six republics refused to take part. These were not just the Baltic republics that had unequivocally opted for self-determination up to cessation or Georgia where Zviad Gamsakhurdia proclaimed a nationalist, isolationist policy but also Armenia and Moldavia – hitherto seemingly loyal.

Moreover, Estonia, Latvia, Lithuania, Georgia and Armenia conducted their own referendums at which the overwhelming majority voted for full independence. Moldavia was split: residents in the self-proclaimed territories of Gagauzia and Transdnestr voted to retain the Union whereas all others boycotted the referendum. In other republics only Soviet army servicemen participated in the vote. The centrifugal process had gained strong momentum and now took disintegration beyond the point of return.

And there was more to it. Without officially dodging the referendum, the governments of some union republics changed the question. Thus, in Kazakhstan people were asked: “Do you think it necessary to retain the USSR as a union of equal sovereign states?” In Ukraine the authorities resorted to a more cunning maneuver: alongside the “Moscow” question (often sounding rather like the derogatory term some Ukrainians used for Moscow: “Moskal”) they included a local issue on the ballot: “Do you think Ukraine should be part of the Union of Soviet sovereign states on the basis of the Declaration on State Sovereignty of Ukraine?”

Such amendments and additions meant the situation descended into the realms of the absurd. Instead of the federation, which, thrice endorsed, still meant a united state, a vague Union of Sovereign States emerged. This was an opaque notion that different politicians were free to interpret in contradictory ways. For Gorbachev and the Union center this was the same old USSR, just under a different name, whereas the leaders of the various republics could easily depict it as some kind of European Union where power is delegated from the bottom to the top, rather than the other way round.

In reality, this entire approach was absurd from the start. After all, the union republics adopted declarations on sovereignty, meaning that any future hypothetical Union, even if it were called a federation, was bound to turn into some implausible hybrid, a kind of realpolitik pull-me-push-you. This was a project that envisaged a sovereign state composed of many other sovereign states.

In the meantime, sovereign states started multiplying within some republics, primarily the largest one: Russia. This was, by definition, not viable. Sovereignty is merely a synonym for independence. There can be no partial independence. The whole structure seemed unworkable. There were only two ways out of this predicament – either full sovereignty for all these new “internal states” was to remain a mere formality designed to satisfy their leaders’ ambitions or the union would collapse.

The Soviet Union, pre-1990, was a typical example of the first option. The union republics had no real sovereignty and the provision about “self-determination up to cessation” remained a mere declaration. Later, after the Soviet Union’s dissolution, years of struggle and two Chechen wars, the federal center managed to forge this model in the form of the Russian Federation. The numerous regions’ declarations on sovereignty lost any meaning they had once had, and their heads were even ready to cede their presidential titles.

What did people vote for?

However, twenty years ago opposite processes were underway in the Soviet Union. Leaders in the republics and their entourage saw an opportunity to seize real power and were no longer ready to settle for paper sovereignty. This applied both to those who were openly moving to cessation and those who were consolidating national independence on the sly, without drawing too much attention to themselves.

Leonid Kravchyuk in Ukraine and the first secretaries of the communist parties of Central Asia and Kazakhstan, who had become presidents, were all in this second category. Unlike them, the position of Azerbaijan’s leader Ayaz Mutalibov was very shaky. He was rapidly losing power in the struggle against the Popular Front. Heydar Aliyev, ready to spring to power, crouched nearby in the neighboring autonomous republic of Nakhichevan. They all had things other than the USSR on their minds. Belarus did not even have a real head of state and had to follow in the wake of Russia where Boris Yeltsin was irrevocably ascending to the presidency. He was double dealing: while not expressly objecting to the Union, he did everything in his power to undermine it.

In principle, they were all ready to delegate some of their powers to the center and Gorbachev. At any rate, this was the case before the August 1991 coup. History does not tolerate a subjunctive mood but logically, the head of the Union of Sovereign States would inevitably have less and less power. Most probably, over time, he would have morphed into a symbolic or ceremonial figurehead, and it is anyone’s guess how long he would have had room to maneuver or the power to resolve disputes. The State Emergency Committee (GKChP) then entered the fray: completely destroying the USSR in its awkward attempt to save it.

All these events took place later but are worth mentioning to demonstrate that on March 17, 1991 the people were not, in fact, voting for the “good old USSR” but for some renewed federation or the union of equal sovereign republics, neither of which was destined to last.

It is no accident that, on the same day, an overwhelming majority of people in the Russian Federation (then still called the Russian Soviet Federative Socialist Republic) voted to introduce the post of president. Anyone elected to this post would have inevitably come into conflict with Gorbachev. Moscow could not have coped with having two presidents. The time bomb had been set and was bound to explode sooner or later.