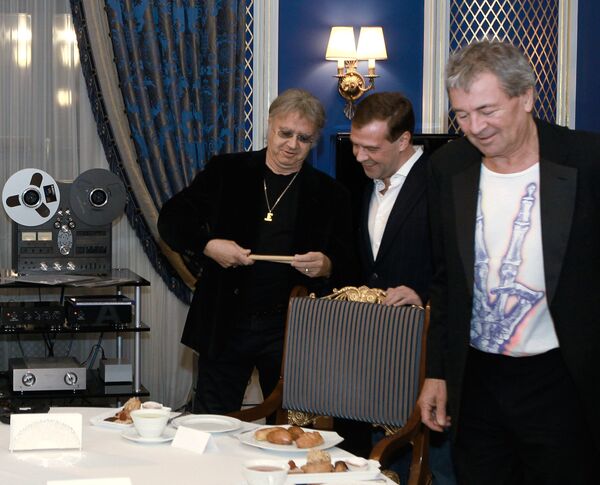 Over tea and pies, Medvedev, 45, told the musicians he used to play Deep Purple tracks to his schoolmates as a DJ at his school disco.

"When I started listening to Deep Purple, I of course could not even imagine that I would be sitting with you at this table," he said.

While waiting for the Russian president to finish a meeting with U.S. Pentagon Chief Robert Gates, the musicians admired Medvedev's collection of audio systems, including a few vintage tape recorders.

The president who admits to being a passionate fan of the group, was presented with a pair of drum sticks from the aged rockers.

After the press left, Medvedev's 15-year-old son allegedly played guitar with the musicians.

The rock group, set up in 1968, has toured Russia on numerous occasions, and Medvedev has been to four concerts.

However, Medvedev's spokeswoman said the president would not be attending tonight's gig at Moscow's Olimpiisky stadium.