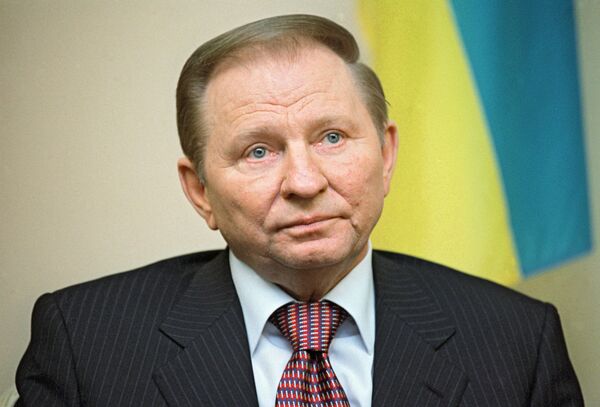 Former Ukrainian President Leonid Kuchma described on Wednesday as a "terrible provocation" accusations that he had ordered the killing of prominent journalist Georgy Gongadze in 2000.

Former Ukrainian President Leonid Kuchma described on Wednesday as a "terrible provocation" accusations that he had ordered the killing of prominent journalist Georgy Gongadze in 2000.

Ukrainian prosecutors on Tuesday accused Kuchma, the president of Ukraine in 1994-2005, of giving orders to former interior minister Yuri Kravchenko to eliminate Gongadze.

"I am absolutely calm; I already said five years ago that this is a terrible provocation against Ukraine. This remains my position," Kuchma told journalists at the Prosecutor General's Office, where he was summoned for questioning.

Gongadze's decapitated body was found in a forest near Kiev in November 2000. A criminal case against Kuchma was initiated a decade later after a secret tape in which he was heard ordering Kravchenko to "deal with" the journalist was released.

Kuchma, who was ordered not to leave Ukraine, said on Wednesday he had been suffering from "the most vicious psychological stress" for already a decade, "that's why I am morally ready to experience all the torments of hell to prove that I am [not guilty]."

He said he was surprised when he learned from media outlets that a criminal case had been initiated against him. The Ukrainian Prosecutor General's Office previously refused to bring Kuchma to trial, saying there were no grounds to do so.

Pukach evaded arrest and fled to Israel. He was arrested in summer 2009 in Kiev and is awaiting trial.

In September the state prosecutor accused Kravchenko, who was interior minister in 2000, of ordering the murder. Kravchenko reportedly committed suicide in 2005.