Putin youth tell me to clear off 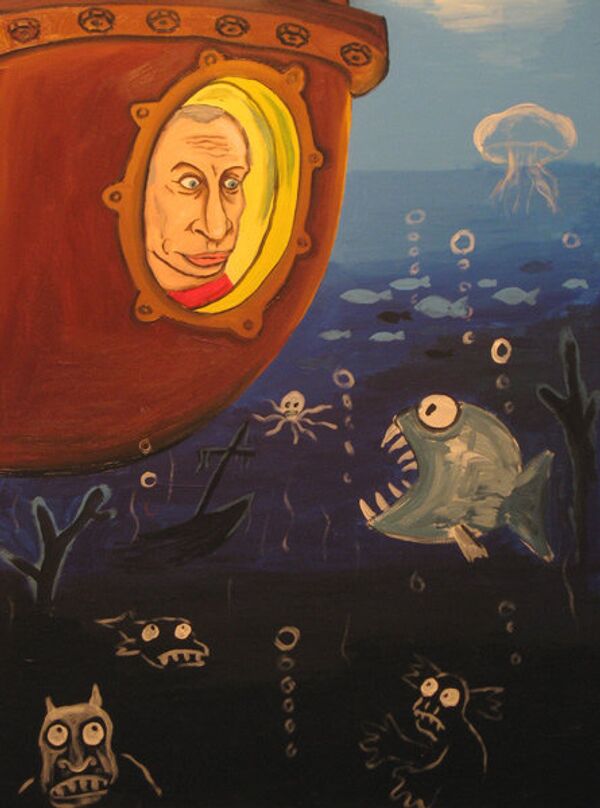 © Vasya Lozhkin
Subscribe
I had an interesting, albeit brief, experience the other day. I walked into a bunch of pro-Kremlin nationalist thugs, and before I had time to walk out again... But listen till I tell you.

I had an interesting, albeit brief, experience the other day. I walked into a bunch of pro-Kremlin nationalist thugs, and before I had time to walk out again... But listen till I tell you.

I was lounging through the market-place of Moscow when an oncoming crowd of chancers and carpetbaggers gesticulated to me in a manner suggesting that I should vacate the kerb forthwith in order to facilitate their unhampered passage through the locality or face immediate repercussions. I merely began whistling "Love Me Do," with variations.

Just then the crowd began to come into focus. Need I say that they were none other than erect members of the youth wing of Prime Minister Vladimir Putin's United Russia party, the Young Guard? Back from a beano, I was later given to understand.

They then gave me a mother and father of a nudge-nudge, which sent me clear off the kerb.

"Out of the way!" they snarled, some wearing Putin T-shirts, some shaved heads.

The Young Guard has its roots in the Komsomol, the Soviet youth organization, and was revived by then president Putin in the early 2000s to prevent a Western-sponsored liberal fervor from infecting Russian youth.

I mused lightly about what I would have done to them had they been tied up; then let my brain idle over more pleasant subjects including packing the whole lot into a bus and throwing it off a bridge.

I have made it a rule to avoid the Young Guard - and this is only partly because of the wooden and predictable rhetoric there ("Putin is our everything!" - yechh!). This time however I decided to try a little tenderness. I suspect that some of them are closet intellectuals but the heavy jackboot stomping of the Kremlin has dampened their ardor.

"Do you think Putin is Super Jesus?" I asked a less thuggish one.

"I mean, do you think Putin is the only man dead or alive capable of turning Russia into a superpower?"

"Why, it is a superpower already!"

I have to agree. Russia is a great country, except when it isn't, which seems to be most of the time.

And while, on the one hand, there can be no doubting the hysterical cult following that Putin has among people who seriously need to Get a Life, there are signs that Russians would be glad enough to see his back.

"I think it's time for him to go," a Moscow medical student, who asked not to be named, told me. "He's been around for quite a while now. If [President Dmitry] Medvedev was on his own, Russia would not be the way it is."

Like many before him, Putin has traveled full circle: from Vlad the Obscure who tidied up the chaos of Russia's post-Soviet democracy to the hardman who does not tolerate any dissent and looks like Dobby the House Elf from Harry Potter movies.

And as the race hots up for next year's presidential election, I think it's just about time we began making up our minds.