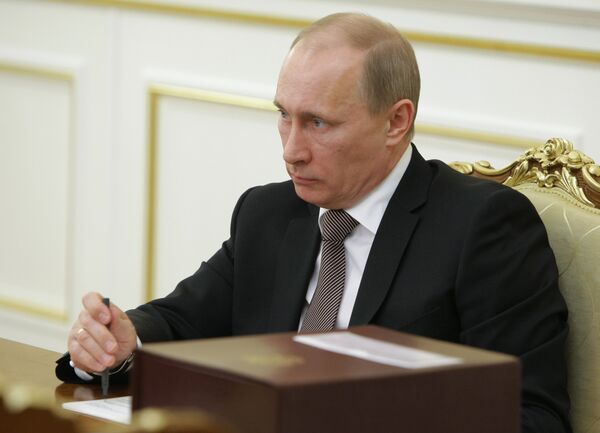 © RIA Novosti . Alexey Nikolsky
/
Go to the photo bank
Subscribe
There is no rift in Russia's ruling tandem over the conflict in Libya, Prime Minister Vladimir Putin said on Tuesday.

There is no rift in Russia's ruling tandem over the conflict in Libya, Prime Minister Vladimir Putin said on Tuesday.

"We have a president in Russia who directs foreign policy and there can not be a split," Putin told reporters in Ljubljana, Slovenia.

Putin - current head of state Dmitry Medvedev's predecessor as president and widely seen as the senior partner in the ruling tandem - likened on Monday a UN Security Council resolution on the imposition of a no-fly zone over Libya to "medieval calls for crusades."

Without directly naming Putin, Medvedev later told journalists that "I think we all need to be careful in our evaluations. In no way is it acceptable to use expressions that in essence lead to a clash of civilizations, such as crusades and so forth -- this is unacceptable."

Allied air strikes against Libyan leader Muammar Gaddafi's forces continued on Tuesday amid reports that dozens of Libyan civilians have died in the attacks.

Putin said those who were responsible for the deaths should "pray for the salvation of their souls."