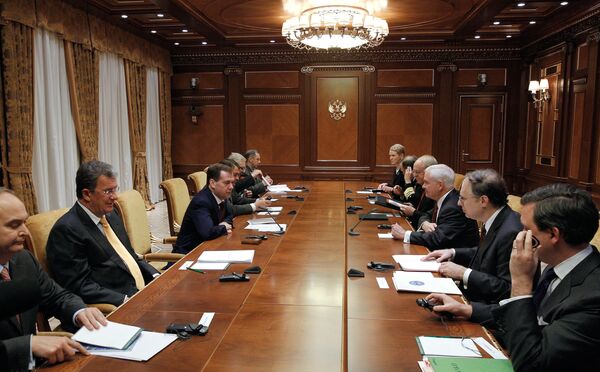 Russian President Dmitry Medvedev reiterated on Tuesday Moscow's offer to mediate in the conflict in Libya.

Russian President Dmitry Medvedev reiterated on Tuesday Moscow's offer to mediate in the conflict in Libya.

Medvedev was speaking during a meeting with U.S. Defense Secretary Robert Gates near Moscow. On Monday, Medvedev said Russia would "gladly" undertake peacemaking efforts in the North African state.

"Medvedev also expressed concern over how the UN no-fly zone is being endorsed and the possible casualties among civilians because of the indiscriminate use of air force," the president's press service said.

NATO member states including the United States, Britain and France are continuing air strikes against Libyan leader Muammar Gaddafi's forces. Libyan state television has reported that at least 60 civilians have so far been killed in the attacks.

Russia opposed military action but did not use its power to veto the UN resolution.

Russian Prime Minister Vladimir Putin likened the operation to "medieval calls for crusades," a description dismissed by President Dmitry Medvedev, who said the comments were "unacceptable."