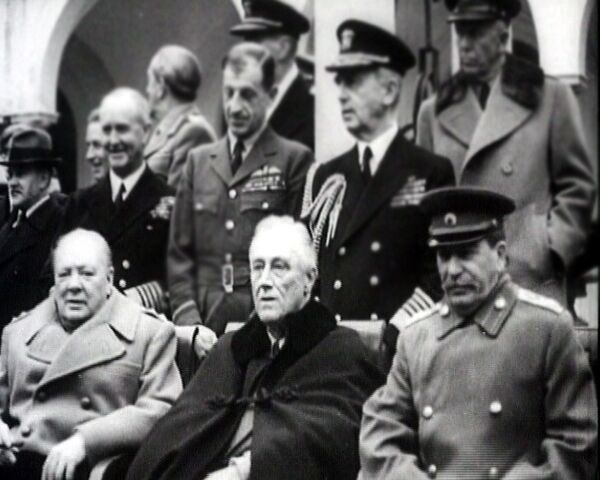 © RIA Novosti
Subscribe
In the two decades since the end of the Cold War, U.S.-Russian relations have been marked by ups and downs, from the euphoria of the early 1990s and the meeting of Vladimir Putin and George Bush in Ljubljana in 2001 to the acute crises spurred by the events in Kosovo and South Ossetia. Regrettably, Moscow and Washington have missed many opportunities to become true strategic partners and allies, to the detriment of both nations’ interests.

This Article Is a Response to “The Myth of Yalta II” By Samuel Charap and Mikhail Troitskiy, Published in The New York Times on March 8 Yalta Conference

In the two decades since the end of the Cold War, U.S.-Russian relations have been marked by ups and downs, from the euphoria of the early 1990s and the meeting of Vladimir Putin and George Bush in Ljubljana in 2001 to the acute crises spurred by the events in Kosovo and South Ossetia. Regrettably, Moscow and Washington have missed many opportunities to become true strategic partners and allies, to the detriment of both nations’ interests.

The Russian-Georgian war of August 2008 threatened to open a new rift between Russia and the United States. However, when President Barack Obama took office early next year, he sought a “reset” in relations with Russia. Obama’s overture was, in fact, the latest in a series of attempts to improve Russian-U.S. relations.

This policy has its supporters and opponents, both in Russia and the United States. Its supporters include young scholars Samuel Charap, an American, and Mikhail Troitskiy, a Russian, who took to the op-ed pages of the New York Times to defend the “reset.” In their article “The Myth of Yalta II,” the authors criticize the advocates of what they call “a Yalta-style grand bargain” between the two countries, as such a bargain is both impossible and unnecessary in today’s world.

Most of the authors’ arguments are solid. Indeed, there is unlikely to be a repeat of Yalta, just as there was no repeat of the Paris Peace Conference of 1919 to 1920 that led to the Versailles-Washington system. There won’t be another Vienna Congress that ended the Napoleonic wars and created a model for international relations that existed until 1914. On this point, the argument that Charap and Troitskiy put forward is indisputable – the historic bargain made at Yalta in 1945 will never be repeated.

However, I do not share the authors’ absolute certainty that “grand bargains” between great powers are now impossible in principle. First of all, what does the term “grand bargain” mean? The division of Europe into two spheres of influence separated by the Iron Curtain is the dark side of Yalta. However, this was just one element of the Yalta-Potsdam system that emerged after World War II. There were positive aspects as well. For instance, the United Nations (which still exists) was a key product of the Yalta world order.

Yalta essentially defined the rules of conduct for the two superpowers in postwar Europe (and the rest of the world), which were entirely consistent with international practices at the time. Therefore, neither Russia nor the United States should reproach themselves for taking part in the Yalta accords. Today’s Yalta critics would do well not to hold politicians of the 1940s to the ethical and legal standards of the new century.

This is not to say that the bipolar world created in Yalta and Potsdam was perfect. This is why Moscow and Washington attempted to change the nature of the international system during the Cold War (e.g. the detente of the 1970s). Mikhail Gorbachev took the Soviet Union even further in this direction. To some extent, his foreign policy was motivated by political and economic challenges at home in the late 1980s. However, this is not the full story. After all, as the powerful general secretary of the Communist Party Central Committee, Gorbachev was in a position to direct internal discontent at the foreign enemy and to suppress any unrest.

Gorbachev sought to change Soviet foreign policy not because he was unable to hold the Soviet Union together by force and prolong the existence of the bipolar world. Rather, like many other politicians, he understood that the Yalta-Potsdam system was growing obsolete and that a more effective model of global relations was needed – one based not on stable confrontation, but on mutually beneficial cooperation and compromise.

The Soviet Union and its successor state – the Russian Federation – did their part to undo the legacy of Yalta: the Warsaw Treaty Organization was disbanded and Russian troops withdrew from Germany and Eastern Europe. This generous, voluntary gesture could have ushered in a new international era, but it went unrecognized in the West. It is telling that Washington, unlike Moscow, is still enjoying the fruits of the very Yalta-Potsdam system it currently maligns. In fact, Washington has considerably expanded its sphere of influence in Europe. In the 1990s, the U.S. political elite could not resist the temptation to take over the Soviet Union’s Yalta inheritance, thereby further strengthening the United States’ geopolitical position in Europe while pretending it did not notice the Kremlin’s unprecedented concession. NATO expanded eastward twice, in 1999 and 2004, bringing new Eastern European allies into an alliance that was created to harness the military capabilities of European nations under U.S. command. U.S. armed forces are still based in Germany, and remain a factor that German politicians must take into account in their foreign policy. Moreover, NATO plans to deploy its military infrastructure in former Warsaw Pact countries – Poland, the Czech Republic, Romania and Bulgaria. So only the Soviet half of the Yalta system has vanished. The system is still in place; its border has simply moved a few hundreds kilometers eastward.

This is the reason why we should be discussing the need to put an end to Yalta I once and for all, rather than debating the prospects of a Yalta II. The remnants of the Yalta-Potsdam system, which have somehow managed to survive, should be replaced with the new accords defining the 21st century rules of the game in the global arena. So a “grand bargain” (in a positive sense) is exactly what is needed to improve the international climate, and yet Charap and Troitskiy dismiss it outright. Otherwise, the Russian-U.S. “reset” may remain mere window dressing – an opportunistic and short-lived political tactic.

What we need are concrete accords and commitments ensuring long-term security for all European countries. So what would turn the now fragile “reset” into a durable foundation on which to improve both U.S.-Russian bilateral relations and European security?

Firstly, it is necessary to do away with the military and political legacy of the Cold War – a logical consequence of the Yalta-Potsdam system that divided Europe into two camps. To achieve this goal, today’s NATO-centric European security system must be replaced with a collective defense agreement among all European countries (this should include the United States and Canada). This would lead to the formation of an open pan-European politico-military mechanism based on an “equal security for all” principle instead of “security for the select few only.” Also by doing this we destroy the last division lines between the West and the East of the continent.

Secondly, it is essential to sign a new treaty on European security based on the principle of its indivisibility (i.e. renouncing any attempts to ensure the security of some European countries at the expense of others). This step would help bring more justice and democracy into the European security model, and help us to avoid conflict in the future. Every European state has to benefit from sharing equal rights for security with its neighbors.

Thirdly, it is necessary to enhance the role of the Organization for Security and Co-operation in Europe (OSCE) by giving it the power to regulate the new international structure. Having been reduced to the status of an election monitor over the last decade and a half, it should become the lynchpin of the new European security system. This means that only the OSCE will be responsible for the conflict resolution and use of force in Europe. Special international rapid reaction forces should be created under the aegis of this organization for implementing peacekeeping operations and humanitarian activities.

Such important reforms will require a great effort, primarily in Washington. The U.S. political establishment will have to reevaluate Cold War stereotypes. Obviously, the powerful military-industrial complex, which has turned the United States into the world’s most militarized state, will fiercely resist the idea of replacing NATO with a collective self-defense treaty. But the fact remains that the new “grand bargain” is essential to creating a safer international environment in Europe. The United States should follow the example set by the Soviet Union and do its part to overcome the legacy of Yalta. If Gorbachev could do it, so can Obama… or a future president.

Alexei Pilko is an associate professor of the Faculty of World Policy at the Moscow Lomonosov State University.