The last will of the Soviet people 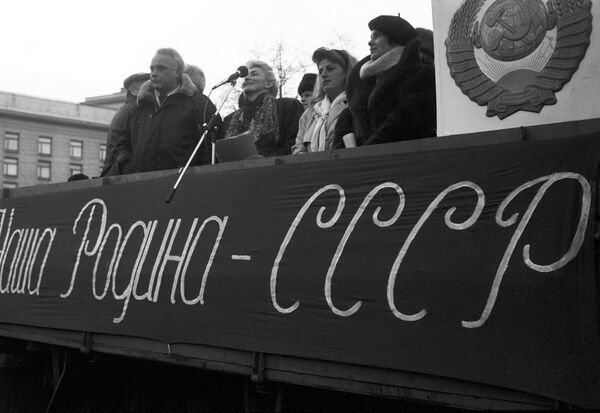 Twenty years ago, on March 17, 1991, the majority of Soviet citizens (76.4%) voted for the preservation of the Union of Soviet Socialist Republics (USSR).

Twenty years ago, on March 17, 1991, the majority of Soviet citizens (76.4%) voted for the preservation of the Union of Soviet Socialist Republics (USSR). The Baltic republics, Georgia, Armenia and Moldova did not take part in the vote. This referendum was a unique occurrence in Soviet history: the Soviet authorities’ desperate attempt to stop the country from disintegrating by appealing directly to the people.

Ironically, several months later it was the people’s will that buried the USSR – on December 1, more than 90% of Ukrainians backed independence even though as recently as March over 70% had voted to retain the union state. With the secession of the second most important Soviet republic, the process had passed the point of no return and within a week the whole world learned that the Belovezhskaya Pushcha accords had been signed and the USSR was officially dissolved.

A plebiscite is considered the highest form of direct democracy. Maybe it works in tiny, orderly Switzerland, where any political or administrative issue is resolved by referendum. In a politically unstable and democratically immature society a referendum does not give a real picture of people’s desires: it is an instrument of manipulation and political intrigue and is used even more brazenly than elections.
The vote on the preservation of the USSR became part of the intense struggle that the union authorities were waging against the elites in the various Soviet republics, mainly in Russia. However, Boris Yeltsin negated the Kremlin’s success in one masterful stroke: offering the Russians a parallel vote on establishing the post of president of the Russian Federation (more than 71% backed the idea). Thus Yeltsin created an alternative center of power that not only outmaneuvered but obliterated its rival. In other words, the Russians simultaneously supported two contradictory scenarios, in two entirely free and legitimate referendums.

Later on, a plethora of referendums were held across the post-Soviet space. However, they either served to consolidate and extend the powers of authoritarian rulers (in Belarus, Kazakhstan, Uzbekistan, Tajikistan and Azerbaijan) or only worsened the political crisis (as with the infamous vote of confidence in Yeltsin that has gone down in history with its “yes-yes-no-yes” slogan). Thus, the bloody events that Moscow saw in October 1993 to an extent resulted from the fact that “the people’s will” as expressed in spring merely exacerbated the legitimacy conflict and the dual power issue.
There was no way of saving the USSR in March 1991, and the referendums had nothing to do with its demise. But they do lead to a peculiar conclusion. They either become the instruments of overtly undemocratic regimes or the attributes of weak elites that are incapable or unwilling to take responsibility for their decisions.

History cannot be reversed but it is always interesting to discuss whether there was a chance to establish a renewed Union of Sovereign Republics (USR) in line with the referendum results. Most probably, the possibility survived until the August 1991 coup but there would have been only a very slim chance that a union along these lines could have stopped the centrifugal process that by then had already gained a powerful momentum. A USR could only ever have been an intermediate phase of the redistribution of power in favor of the republics but the question of their independence would have been raised eventually and the final outcome would have been the same. The Union was doomed because the national leaders’ desire for fully-fledged power could no longer be sated by half-hearted solutions.

Had an agreement to establish a USR been signed in August, it would have alleviated the nature and consequences of the USSR’s dissolution, above all in economic terms. The local elites would have received the very same mechanism of “amicable divorce” that was later created hastily and called the Commonwealth of Independent States. This would have been a better mechanism, and the people would probably not have paid so high a price for the country’s disintegration. But although it was the people who paid, the politicians set the price. Each was ready to go to any lengths for the sake of the main prize.

After March 17, the community that had hitherto been known as “the Soviet people” ceased to exist. Their last will, as expressed in the referendum on keeping the USSR, remained unfulfilled.