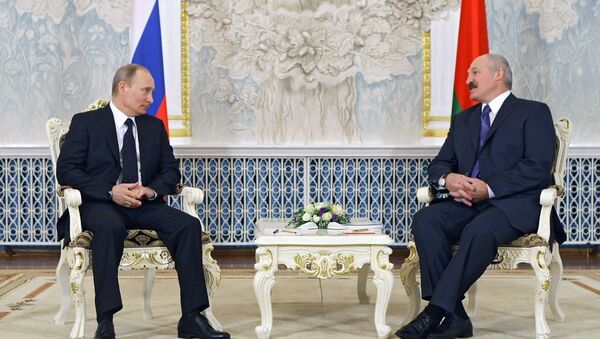 Russian Prime Minister Vladimir Putin tactfully avoided discussion of recent human rights abuses in Belarus during his visit to Minsk this week, choosing instead to strengthen Russia's ties with its authoritarian neighbor.

On the eve of Putin's visit on Tuesday, Human Rights Watch, a New York-based advocacy group, published a report detailing cases of torture, beatings and repression in Belarus since hundreds of activists were imprisoned during a mass public protest in December 2010, when a 40,000-strong crowd protested the allegedly flawed reelection of President Alexander Lukashenko, who has ruled Belarus with an iron fist since 1994.

"Detainees served their sentences in overcrowded cells, where they were forced to sleep on the floor, share beds, or take turns sleeping," the report reads. "Many say their cells were freezing and lacked toilets."

One former presidential candidate, Ales Mikhalevich, said he was beaten, stripped naked and hung by his hands during his two month confinement. He announced in his blog on Tuesday that he had fled Belarus in order to avoid further prosecution by the Belarusian secret police, which is still known by the much-feared Soviet acronym "KGB."

Far from using Russia's deep historical and trade ties with its westerly neighbor to chide Lukashenko over the allegations, Putin signed a deal on Tuesday to push ahead with a stalled plan to build a nuclear power plant in Belarus, and entered talks on a requested $1 billion loan to fund privatizations in the country.

Russia is in a strong position to exert influence over the Belarusian authorities, who have found themselves isolated by a travel ban from the European Union and economic sanctions from the United States over human rights abuses.

The EU is currently in talks on extending its sanctions to include prosecutors, judges and officers from the country's secret service connected with the trials of those detained in December's protests.

The Belarusian secret service is investigating more than 46 individuals on riot charges and 30, including two former presidential candidates, remain in prison. Four people have already been sentenced to up to four years in jail.

"I don't remember a time when there was such a high level of repression as the authorities are now imposing on Belarusian civil society," Ales Belyatsky, the chairman of the Minsk-based human rights organization Viasna, said at a news conference in Moscow on Monday.

Although its response has been relatively muted, the Kremlin has certainly not turned a blind eye to the events in Belarus. Meeting with human rights groups on February 1, President Dmitry Medvedev said he was "surprised by what has happened there [in Belarus]." The next day, Foreign Minister Sergei Lavrov described the arrests as "unacceptable" and advised Belarus to satisfy the demands of the EU by releasing the detainees. Russia was also quick to condemn the arrest of Russian citizens involved in December's protest.

Two, Artyom Breus and Ivan Gaponov, remained in detention until March 10. They were found guilty of participating in mass unrest and fined $3,500 each. Their release and relatively lenient sentences came just days before Putin's visit.

Now Russia no longer has a direct interest in the detainees, what little criticism of human rights abuses there has been will likely disappear completely, with more lucrative topics taking precedence.

"At the moment Russia's approach to Belarus is entirely pragmatic," said Alex Nice from the London-based think tank Chatham House. "They are caught between a policy of wanting to pressurize Belarus in order to maximize income on gas sales and also of trying to get access to the privatization assets being made available.

"At the same time, there's no other force in Belarus that Russia can really back at the moment, so there is a limit to the pressure they can put on the country."