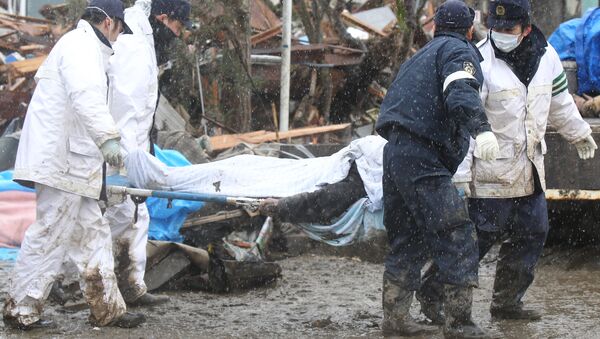 © RIA Novosti . Ilya Pitalev
/
Go to the photo bank
Subscribe
The explosions at Japan's Fukushima nuclear plant sent stocks plummeting on Japanese stock exchanges. The Nikkei and TOPIX indexes fell 10.55% and 9.47%, respectively. Pessimism is spreading across the world, with key indexes in China falling by 1.4-2.4 percentage points and the Russian market dipping 2.5% by noon on March 15.

The explosions at Japan's Fukushima nuclear plant sent stocks plummeting on Japanese stock exchanges. The Nikkei and TOPIX indexes fell 10.55% and 9.47%, respectively. Pessimism is spreading across the world, with key indexes in China falling by 1.4-2.4 percentage points and the Russian market dipping 2.5% by noon on March 15.

One could chalk this up to speculators overreacting, if not for two things: first, the global crisis began in 2008 on the exchanges, and second, the post-crisis economy continues to teeter between recovery and decline.

The year 2011 was bound to be difficult. Last year's droughts and floods have caused food shortages and higher inflation around the world. Revolts in the Middle East have caused oil prices to spike. Thousands of refugees are spilling into Europe, further complicating ethnic relations.

Any one of these challenges could prove fatal, as the global economic crisis is far from over. It continues to manifest itself in different ways around the world, for example as a sovereign debt crisis.

"The economy is teetering on the brink," said Igor Nikolayev, chief of strategic analysis at FBK, one of the first private auditing firms in Russia. "The problems that caused the crisis have not been fixed; worse still, on top of stock market and commodities bubbles, there is now a food market bubble."

Even a smaller disaster could have provoked a new round of the crisis, Nikolayev says, not to mention the massive earthquake and tsunami that have crippled the third largest economy in the world. This may sound like an exaggeration, but the fact is that Japanese automakers have halted production, the country is facing food and fuel shortages, and the earthquakes still have not stopped.

Early estimates put Japan's economic losses at 3% of GDP, and this figure is likely to grow.

The bad news coming out of Japan is pushing Asian stock exchanges down, and rippling through exchanges across the world. The panic factor could easily tip the scales, sending the global economy hurtling back to 2008, when plummeting stock prices deflated many bubbles. A new financial crisis could emerge. Banks could restrict lending, with the subsequent erosion of demand and investment hitting the non-financial sectors hardest.

The time may have come for the world to settle its old debts, so to speak. During the economic crisis of 2008 and 2009, politicians and business leaders identified the root causes of the crisis but failed to eliminate them. Some countries, such as the United States, took measures to restore economic balance, while others, for example Russia, moved in the opposite direction.

There is no consensus on how the humanitarian and economic disaster in Japan will affect the global economy. Yevgeny Yasin, academic supervisor of the Higher School of Economics in Moscow, says the market economies are good at adapting to crises. They "mobilize resources during times of trouble and encourage business to work and generate profit." The economist is convinced that Japan will see a return to economic growth sooner rather than later.

Support for this view can be seen in the relative tranquility on Western exchanges. The Dow Jones fell only 0.43% yesterday, while the Nasdaq dropped 0.54%.

Yulia Tseplyayeva, chief analyst at the Moscow office of BNP Paribas, is also skeptical of the doomsday scenarios. She believes the disaster will bolster the construction sector and keep energy prices high (which suits Russia), as Japan will need to buy more fuel to rebuild its economy. The increased demand in Japan will also benefit Chinese industries.

However, Mr. Nikolayev thinks that the benefits, such as the inflow of private and government investment, will not come into play for at least a year, whereas the negative consequences for the global economy could be felt much sooner.