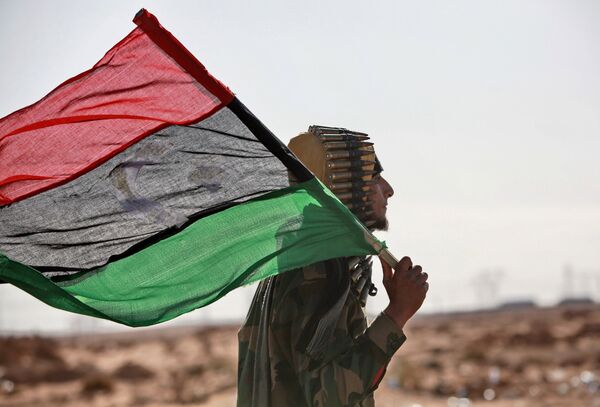 © Andrei Stenin
/
Go to the photo bank
Subscribe
Forces loyal to Col. Muammar Gaddafi have regained control of Ajdabiya, a key town about 100 miles from both the capital, Tripoli, and the main opposition stronghold of Benghazi.

Forces loyal to Col. Muammar Gaddafi have regained control of Ajdabiya, a key town about 100 miles from both the capital, Tripoli, and the main opposition stronghold of Benghazi.

Gaddafi loyalists entered the town on Tuesday, calling on the city residents to remain calm and on rebels to lay down their arms through megaphones, a RIA Novosti correspondent reported. "You and us, we are one nation; lay down your arms," they said.

Witnesses said Gaddafi's warplanes carried out at least four airstrikes against the town before entering it.

The town lies on the crossroads between Benghazi and the port of Tobruk near the Egyptian border. Libyan troops will now take the main road to Tobruk and the border with Egypt, cutting off the rebels and surrounding them, a source in Tripoli told RIA Novosti.

The Al Jamahiriya TV channel controlled by Gaddafi reported earlier in the day that the town had been retaken by Gaddafi loyalists. "The city of Ajdabiya has been freed from groups of mercenaries and terrorists linked to Al Qaeda," the TV channel said in a breaking news report.

Al Jazeera said, however, that rebels in Ajdabiya were still offering resistance to pro-Gaddafi troops. They have also claimed that their planes sank two Libyan warships near the country's eastern coast close to Ajdabiya, the TV channel said.

Several thousand people have been killed in the unrest that began in the country in mid-February. Pro-Gaddafi forces have now regained control of many towns in the country's north, pushing rebels back to the east.