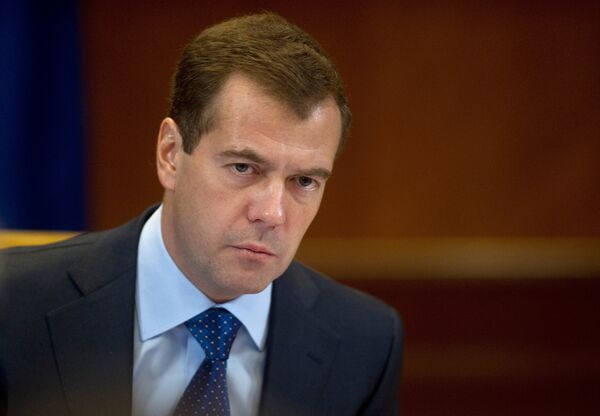 © RIA Novosti . Sergey Guneev
/
Go to the mediabank
Subscribe
International
India
Africa
Russian President Dmitry Medvedev said on Monday organizing illegal casinos should be treated as a crime, not as an administrative offence.

Russian President Dmitry Medvedev said on Monday organizing illegal casinos should be treated as a crime, not as an administrative offence.

Illegal casinos have mushroomed across Russia since a law came into force in July 2009 banning gambling everywhere except in four remote zones. Moscow police said last month that 388 illegal casinos were shut down in the capital in just the first six weeks of the year.

"Certain illegal activities should be treated as a crime, so let's think of making the [illegal] gambling business a criminal offence," the Russian president told Russian Prosecutor General Yury Chaika.

He said illegal casino owners are 'contemptuous' of the law, because their deeds are classed as running an unregistered enterprise.

"Instruct prosecutors to check all the information here, they must inspect every address, in every city," he said.

The governors of Moscow and St. Petersburg have complained that the laws against gambling are inadequate, particularly regarding lotteries, which can be used to circumvent the restrictions on gaming, the Kremlin statement said.