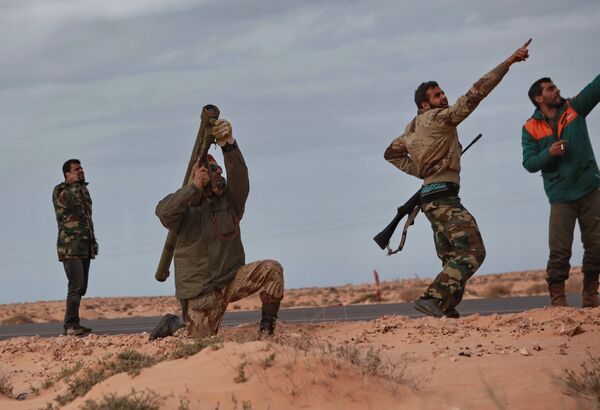 © RIA Novosti . Andrei Stenin
/
Go to the mediabank
Subscribe
International
India
Africa
France is the first NATO and EU country to officially recognize the Libyan rebel leadership, the National Transitional Council, as the country's legitimate government, and will send an ambassador to the rebel stronghold of Benghazi.

France is the first NATO and EU country to officially recognize the Libyan rebel leadership, the National Transitional Council, as the country's legitimate government, and will send an ambassador to the rebel stronghold of Benghazi.

Other EU countries - the United Kingdom and Germany - may or may not follow France's lead. For now they have urged all EU members not to cooperate with the regime of Muammar Gaddafi. Traditionally, the EU has been in the business of recognizing states, not governments. But given what a mess Libya has become in recent days, there is little concern over such trifles.

Clearly the time has come to completely isolate Gaddafi, and the sooner the better. The problem is nobody knows how exactly to go about it. This indecision may be the key that allows Gaddafi to remain in power.

Europe has been dedicating almost all of its attention to Libya in the past few days. EU foreign ministers and NATO defense ministers met in Brussels on March 10, and an EU summit is scheduled for March 11. The focus of these meetings is the same: how to remove Gaddafi from power without provoking a backlash against the West.

A NATO or U.S.-led invasion of Libya would inevitably stir up anti-Western sentiment. The Arab masses might see it as an effort to hijack their popular revolutions. And the heavy toll exacted by a military intervention would inevitably lead to widespread anger. No one wants another Kuwait, Afghanistan or Iraq. This would only fuel suspicions that the West sees itself as a global government, with NATO acting as the world's police force.

President Barack Obama cannot afford this turn of events, especially given the uncertainty in Egypt and Tunisia; their revolutions are far from over and stability is still a distant goal. For Obama, a Western military intervention would fly in the face of his overtures to the Arab world and his vow to abandon the unilateral approach of his predecessor. But Obama cannot wait for the fighting in Libya to run its course. Both Republicans and Democrats are urging a proactive course that would begin with a no-fly zone over Libya. This was the United States' first step in Kuwait in 1991, Yugoslavia (Kosovo) in 1999, Afghanistan in 2001 and Iraq in 2003.

Brussels, Washington, London and Paris have expressed reservations against imposing a no-fly zone over Libya. They believe it is still too early to take such a dramatic step, and besides NATO has vowed not to act without the approval of the UN Security Council. Such statements have only added to the confusion. U.S. Defense Secretary Robert Gates, for example, said that imposing a no-fly zone over Libya would require destroying its air defenses - a move tantamount to a declaration of war. It would appear that the threat of a no-fly zone is NATO's only leverage, but Moscow and Beijing are opposed. And without their consent, the UN Security Council will not be able to pass the necessary resolution.

But Russia has already done much to disarm the Gaddafi regime to its own detriment. On March 9, President Dmitry Medvedev signed a decree approving the February 26 sanctions of the UN Security Council. Moscow has declared a complete embargo on all arms supplies to Libya and on the transit of all military cargo bound for Libya through its territory. Cargo to and from Libya will be subjected to a thorough examination throughout all of Russia. All military equipment discovered will either be confiscated or destroyed. Meanwhile, Russia has $2 billion worth of arms contracts with Libya, and had intended to sign new contracts worth another $1.8 billion. By approving the sanctions, Moscow forfeited about $4 billion.

Imposing a no-fly zone over Libya would not be terribly complicated. The United States and NATO have the necessary technical means. Secretary Gates' warning about the dangers of a no-fly zone was probably a cunning attempt to scare off overzealous congressmen.

But maintaining a no-fly zone is an expensive undertaking. It requires regular patrols by fighter jets, AWACS (Airborne Warning and Control System) aircraft, refueling in the air, aircraft carriers, auxiliary warships, helicopters for rescuing downed pilots, etc. It cost the United States $1.5 billion to maintain a no-fly zone over Iraq for almost a year. In Kosovo, flights were banned for three years. And in both cases there was a risk of foreign planes (Iranian or Serbian) flying into the protected airspace. Fortunately, there were no incidents.

Libya is a different matter. None of its neighbors has any sympathy for Gaddafi, and so he cannot expect any outside air support. NATO military experts maintain that Libya has no more than 300 fighter jets, mostly Soviet MIG-23s and MIG-25s, more than half of which are inoperative. The Libyan air force is simply unable to offer any meaningful resistance to NATO aircraft.

The bigger challenge will be Gaddafi's ground forces. Gaddafi's tanks and artillery will have to be destroyed, and using aircraft in a desert for this purpose will be much more difficult. And almost all Arab states and organizations are against sending in ground forces.

They are not against a no-fly zone, and Moscow and Beijing would probably sign on to one eventually in the UN Security Council. But banning flights would not be enough anyway. Closing the skies is one thing; launching a ground-based intervention is quite another.

NATO will focus instead on "humanitarian intervention," which involves the delivery of "humanitarian relief" (and weapons) to the rebels on U.S., British, French and Italian warships. Ivo Daalder, U.S. ambassador to NATO, and Samantha Power, a foreign-policy advisor to President Obama, are strong supporters of humanitarian intervention. Daalder even wrote a book justifying the principles of "soft intervention" in the event of mass killings, as in the case of Darfur.

However, a protracted civil war - of the kind seen in other African countries - is an unlikely prospect in Libya. There is simply no place to hide in a vast desert with just a few cities. In Libya, the only option is to force the other side out of the cities it occupies, razing them to the ground in the process. Whichever side has more (and better) weapons will surely win. And for the time being, Gaddafi has the edge.

However, when the "humanitarian intervention" begins, you can expect the balance to shift very rapidly. And bombing Libya is still very much on the table.