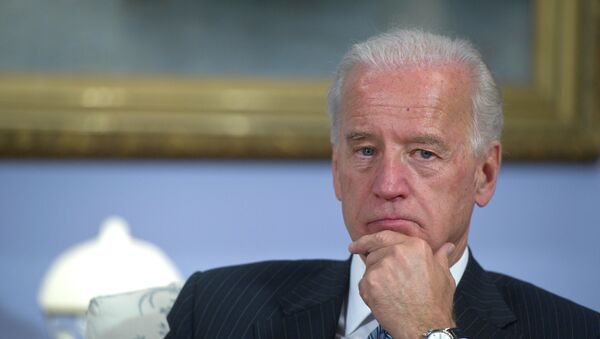 During a meeting with human rights activists in Moscow on Thursday, Biden said democracy, fair elections and commitment to human rights were essential for Russia's accession to the World Trade Organization.

"He said how important it is for any government to work with civil society and how civil society should have control over the ruling authorities," she said.

Biden indicated the U.S. Congress would not repeal the Jackson-Vanik amendment, a piece of legislation from the Cold War era that imposed restrictions on trade with Russia, if the government failed to ensure free and fair parliamentary and presidential elections.

Biden said Washington had tried to talk Georgia out of blocking Russia's accession to the WTO, according to a Russian official.

Georgia says it will not allow Russia to join the global free trade club unless it cedes control of customs in the breakaway Georgian regions of South Ossetia and Abkhazia.

He added however that Washington gave no guarantees.

Russia is the only major economy still outside the WTO. The European Union gave its formal backing to the country's entry bid in December after Russia agreed to trim timber export duties and rail freight tariffs.

"If Russia and the United States agreed to introduce a visa-free regime before Russia makes an agreement on the matter with the European Union, it would be a historical step in the development of Russian-U.S. relations," Putin said.

The Russian authorities have long been trying to persuade Europe to drop visas for Russian citizens, but their attempts have so far yielded no significant results.

Ushakov said no practical measures to scrap visa requirements were discussed at the talks.

"Positive signals... should lead to practical steps. Then it would be easier for both countries to abandon stereotypes that have existed for long time," he said.

Trade was at the top of Biden's talks with Putin.

Biden said it was vital to deepen economic ties with Russia.