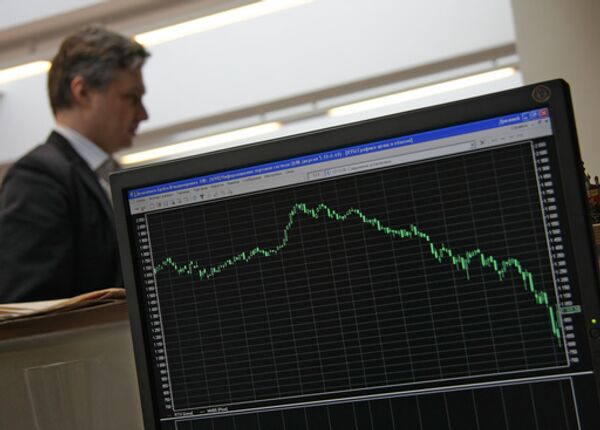 "Investors are afraid of starting projects in Russia. They do not see serious reasons for the Russian economy to grow," Bank of Moscow analyst Kirill Tremasov told RIA Novosti. "This (capital outflow) will be the dominant trend for the whole of the year."

Capital has rushed to developed countries in the last few weeks, on the back of positive news from Europe and the USA. The emerging economies are looking somewhat overstretched in their macroeconomic parameters and seem less attractive. Russia, however, looks a poor relative even in the family of emerging market states.

The market expects Russia's gross domestic product to grow 4.4% this year compared to 8% in China, 6.3% in Indonesia and 4.5-5% in Brazil. Russia's government is hoping for 6-7% inflation this year, but analysts say 8% or more would be more realistic. In China and Brazil, prices are likely to rise 5% in 2011.

Bank of Moscow figures show that Russia's investment in fixed assets is still 12% below the pre-crisis level.

"Investors believe that investment risks in Russia are higher than abroad. They do not want to invest in Russia, but in foreign countries," said Sergei Karykhalin from TKB Capital.

First Deputy Central Bank Chairman Alexei Ulyukayev called capital outflow "a run for quality." He also complained that central bank intervention on the foreign exchange market failed to absorb all the foreign currency coming into the country as prices surge for oil, Russia's key export. The remainder goes back to be invested abroad.

"The outflow coincided with rising oil prices and it is only logical to suggest that the windfall revenue coming into Russia because of expensive oil cannot find investment instruments here," said Uralsib analyst Alexei Devyatov.

Bank of Moscow's Tremasov said some 1.5 trillion rubles of liquidity the government had injected in the economy during the world economic crisis were sloshing around and had to be invested in low-yield central bank bonds, for lack of other instruments.

"Money is not in much demand on the Russian market. The situation in the economy is characterized by high savings and low investment activity," he said.

Renaissance Capital analyst Anton Nikitin said the excessive liquidity meant the ruble was turning into a funding currency rather than a currency of investment. Companies take credits in rubles and convert the rubles into foreign currencies to repay their debts and invest abroad.

"This year the problem of the ruble becoming a funding, not an investment currency is getting more serious," he said.

Higher taxation - the government raised the payroll tax for large and medium-sized firms to 34% in 2011 from 26% in 2010 - also contributes to companies' unwillingness to expand in Russia.

Analysts say investors view Russia's elections to the State Duma, the  lower house of parliament in December and presidential polls next March as a risk.

"Our life here is modeled in a way that a lot depends on the one who takes the top Kremlin position ... Investors do not intend to launch projects before the model of the next political cycle is determined," Tremasov said.

Although Russian observers believe that Prime Minister Vladimir Putin will continue to rule the country no matter which office he occupied after the elections, recent unexpected upheavals in the Middle East and Africa that toppled seemingly stable regimes have made some investors wary of the Russian polls, he said.