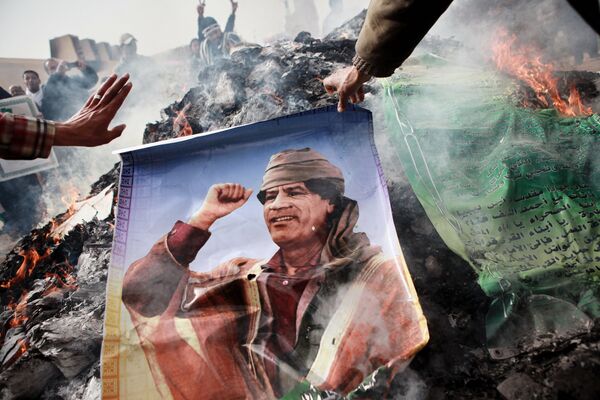 © RIA Novosti
Subscribe
The uprising against the authoritarian rule of Muammar Gaddafi has plunged Libya into civil war. Now the very existence of the nation of Libya, as we know it, is in question.

The uprising against the authoritarian rule of Muammar Gaddafi has plunged Libya into civil war. Now the very existence of the nation of Libya, as we know it, is in question. Colonel Gaddafi has just ignored the demand of the opposition National Council to leave the country within 72 hours. At the U.S. and British initiative the UN Security Council is now holding consultation on establishing zones barred from flights of Libyan aviation over Libya. Russian diplomats are also taking part in these debates. Even if Gaddafi survives the fight, he will never be able to bring all of Libya back under his control.

The tribes that have turned away from him, elements of the military that have defected to the opposition, the Islamists that have always hated him, and, of course, the United States will not allow it.

Libya is not Tunisia or Egypt, where unrest was largely fueled by social discontent. Other factors have played a major role in Libya, for example the reemergence in the U.S. government of a desire to remove Gaddafi from power. The U.S. actively sought his overthrow in the 1980s but abandoned these efforts after a number of setbacks. Thirty years ago the U.S. intelligence community came to the conclusion that it is in the U.S. interest to have anyone other than Gaddafi in power. Journalist Bob Woodward, who has many contacts in the intelligence community, described the strategy to oust the Libyan leader as a combination of concrete actions and disinformation: spreading rumors about the strength of the opposition and betrayal in the colonel's inner circle, as well as using reports about an impending U.S. military action to intimidate Gaddafi.

The strategy was rooted in the fact that the exalted colonel was known to harbor suspicions about those around him. This was his psychological weak spot. Indeed, it was difficult for Gaddafi to trust people after surviving a dozen attempts on his life, all the more so since some of the perpetrators were among his closest friends.

Gaddafi faced these challenges to his rule immediately after he helped Libya overthrow the monarchy in 1969. His associate and friend from school and the army, Umar Mihayshi, turned against him in 1975. The conspiracy was uncovered, but Mihayshi managed to flee to Tunisia and, later, to Egypt.

Now one gets the impression that the Americans have not even tried to develop a new strategy but simply dusted off their old plans when tensions in Libya started escalating in the wake of the revolts in Tunisia and Egypt. Discussions of possible NATO intervention has been ongoing for two weeks now, and everything that has been proposed so far is very similar to that combination of concrete actions and disinformation that was supposed to exert serious psychological pressure on Gaddafi and his inner circle decades ago.

A history of disunity

Will Gaddafi's successors manage to maintain the borders Libya has had since it gained independence in 1951 through the efforts of King Idris? Before that, there were three essentially autonomous provinces: Tripolitania, Fezzan, and Cyrenaica. The king first drew them into a federal united kingdom before proclaiming a unitary state some years later. He paid dearly for unification, accepting Western military bases in Libya and the transfer of the national oil and gas industry to American and British businesses. In other words, he had to agree to give back part of Libya's long-sought independence. It was only under Gaddafi that Libya became truly independent and even more centralized under his new Jamahiriya ("state of the masses") system. However, the Libyan people were denied their freedom under Gaddafi.

Now, with the outbreak of civil war, the centrifugal trends in the country are growing stronger. The conflict runs deeper than the geographical separation and economic inequality of the provinces, the poorest of which is the land-locked Fezzan and the wealthiest - oil-rich Cyrenaica in the east. We must also consider the intricate tribal structure under which Libya's seven million people live. The majority still follows traditional tribal laws. Libyan ethnographer Faradj Abdel Aziz Najm writes that there are about 140 tribes and families in Libya, with more than 30 of these playing a major role in the region. A dozen or so cross-border tribes also live in Egypt, Tunisia, Morocco and even Chad. Some nomadic tribes originated in Saudi Arabia.

Gaddafi relied on this traditional tribal structure to remain in power. But he only relied on the tribes he was closest to (or belonged to), such as the al-Gaddafi and al-Megrahi tribes. Representatives of the Warfalla tribe were treated well by the authorities, but they still considered themselves disadvantaged and locked out of official positions and leadership positions in the army. Perhaps this is why several sheikhs of this tribe were among the first to support the armed opposition. Tribal feuds are nothing new in Libya, but it is unclear this time whether the tribes will choose to remain in a unified Libya or to break off into separate republics, as in the past.

If not the army, then Islam

The Libyan army cannot act as the guarantor of unity because it has already been divided by the current civil war. Part of the military has joined the opposition but another part remains loyal to Col. Gaddafi. And these are not just mercenaries, which have been a feature of the Libyan army in recent years and were not brought in to deal specifically with the unrest. Although the Libyan army was well equipped, the level of training and the reliability of the officers' corps was dubious. Anatoly Yegorin, Chief Fellow of the Russian Academy of Sciences' Institute of Oriental Studies and a leading Russian specialist on Libya, reminded me that "Gaddafi saw the army as a threat to his power because of frequent coup attempts staged by its officers." He added: "The actions of top officers against the regime put Gaddafi on the alert in the late 1980s and diminished the army's role in the country."

So what can prevent Libya from falling apart? We may see a repeat of the scenario in the mid 20th century, when the leading world powers agreed to preserve Libya's unity. But in this case they will have to get involved in the domestic affairs of Libya's territories, which would greatly disappoint the Libyan opposition. Their homegrown authoritarian ruler could be replaced by some form of foreign control.

Faradj Abdel Aziz Nadj has suggested another scenario. The ethnographer sees Islam, the faith of almost all Libyans, as a means to unify the tribes and provinces of Libya. The formation of a powerful Islamic party or an alliance between several Muslim parties could hold Libya together. But how will this solution suit the West?

Yelena Suponina is a Moscow News political analyst specializing in the Middle East; she holds a degree in philosophy.