The Yugoslavian option for Libya 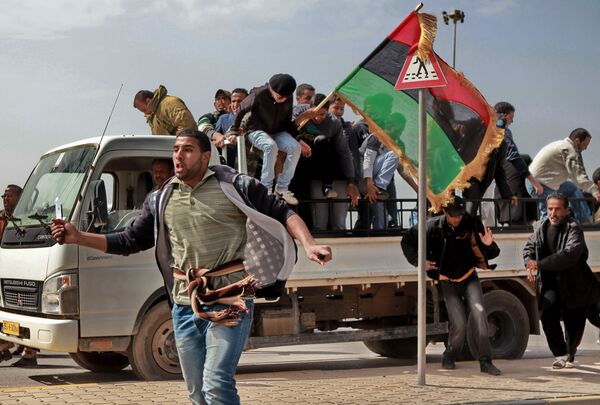 President Barack Obama has finally come out and said that all options are on the table for Libya, including military options.

President Barack Obama has finally come out and said that all options are on the table for Libya, including military options.

Now that hopes for a quick and relatively bloodless overthrow of Muammar Gaddafi have faded, both internal and external pressure are being brought to bear in an effort to force the dictator out. Diplomacy has been tried. Sanctions have been imposed. Military force is all that's left.

The old term used to describe such actions, "gunboat diplomacy," is no longer politically correct. Now "liberal intervention" is preferred. But while the name may have changed, the methods have not. Libya appears to be maneuvered down the same path of action that culminated in the NATO bombing of Yugoslavia, which started on March 24, 1999, after a no-fly zone was announced.

Gaddafi is certainly not a likable person. You can even despise the man. But his opponents in the international community are going somewhat over the top, utilizing a very familiar arsenal of trickery and guile. International Criminal Court Prosecutor Luis Moreno-Ocampo said on March 3 that the ICC will investigate Libyan leader Muammar Gaddafi and his inner circle, including some of his sons, for possible crimes against humanity in the violent crackdown on anti-government protesters. Conveniently enough, the UN Security Council had approved the investigation on February 26, which was a necessary prerequisite, as Libya is not a signatory of the Rome Statute of the International Criminal Court.

The most interesting aspect of this is, however, that the resolution was approved by 15 of the Security Council's 15 members, even though the United States and Russia have not ratified the ICC treaty, do not recognize its jurisdiction and therefore are not legal signatories, whereas China does not recognize the court at all.

The United States even insisted that the resolution be amended to include a clause exempting its citizens from the court's jurisdiction. It was a prudent, if hypocritical, move, providing cover for the United States in the event that it chooses to deploy troops in Libya as part of a humanitarian intervention.

The United States and NATO started gathering a strike force near Libya in early February. The amphibious assault ships USS Kearsarge and USS Ponce and the nuclear submarine Scranton passed through the Suez Canal and reached Libya's Gulf of Sidra by March 4. They are part of the group led by the aircraft carrier USS Enterprise, which is said to be carrying some 42 helicopters on board. Libya is within striking distance.

So far, only Russia and China have spoken out against a military intervention. The other permanent members of the Security Council are insisting that all options are on the table, while acknowledging that any intervention must be approved by the UN.

In spring 1999, Russia and China blocked approval of a military operation in Yugoslavia, but NATO still bombed the country under the authority vested by its own charter. However, a broad interpretation of the charter allows almost any kind of intervention in any country.

Yugoslavia did not attack a NATO member state and therefore did not threaten the alliance. The decision to bomb Yugoslavia was made by Democratic President Bill Clinton. Some claim Clinton was just wagging the dog - using the intervention in Yugoslavia to distract Americans from the Lewinsky scandal and the threat of impeachment Clinton was facing for lying to Congress about the affair.

Barack Obama is not involved in any scandal and is already waging two wars - in Afghanistan and Iraq. He hardly needs to add a third. But helping the Libyan rebels oust Gaddafi will not necessarily lead to a war. The dictator only has the support of security forces that are dependent on his regime.

A little more blood should do the trick

Sending warships to Libya is only a demonstration of force meant to pressure Gaddafi. The United States and NATO need a convincing reason (or pretext) to intervene militarily.

The invasion of Afghanistan was justified by the September 11th attacks. President Bush was seen as having no other option. But there was no convincing reason to invade Iraq, just the manufactured pretext that Saddam Hussein was pursuing weapons of mass destruction. So far, there are no solid legal grounds to justify an invasion of Libya.

However, Gaddafi could provide the justification. No one in the West has said a military intervention is being planned, but no one has denied it either. Politicians are beating the drum for war, saying that an invasion cannot be ruled out if the bloodshed continues in Libya.

Recent reports from Libya claim that forces loyal to Gaddafi are attacking cities held by rebel forces, and that the death toll is in the hundreds. If the West continues to pressure Gaddafi, he will spill enough innocent blood to justify an invasion, which the Republicans in the United States are openly demanding.

The military preparations underway in the Mediterranean go beyond the simple redeployment of U.S. warships "just in case." These preparations always have a critical mass - the line beyond which war becomes unavoidable.

There are sufficient material and financial incentives for crossing this line, and after all, the warships positioned off the coast of Libya are not children's toys.

USS Kearsarge is one of the world's largest assault vessels of its kind. It has dozens of helicopters on board, missiles, landing craft, and over 2,000 Marines. The ship was used in the Yugoslavian operation in 1999 to deploy Marines, reconnaissance groups and special forces.

USS Ponce and the nuclear submarine Scranton were also involved in Yugoslavia. Scranton-class submarines are armed with cruise missiles and are designed to land troops covertly and to conduct subversive operations.

Meanwhile, London has announced that it is sending in a SAS unit to save about 20 British oil workers stranded in southeast Libya (the SAS is an elite fighting force on par the U.S. Navy SEALs or the Alpha counterterrorism unit of the Russian special forces).

This may be just the beginning.