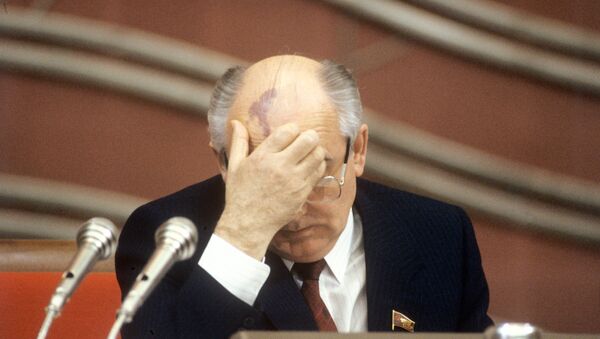 © RIA Novosti . Leonid Palladin
/
Go to the photo bank
Subscribe
Mikhail Gorbachev turns 80 today and will celebrate with a small gathering in Moscow for family and friends.

Mikhail Gorbachev turns 80 today and will celebrate with a small gathering in Moscow for family and friends. A far larger celebration will take place in London at the Royal Albert Hall later this month, and will include a lineup of musical acts and VIP guests. The contrast in these celebrations, both in tone and style, reflects Gorbachev’s two public legacies: In the west, he is seen as a hero, the man who ended communism and released the countries of Eastern Europe from the grasp of the Soviet Union. But in Russia many remain ambivalent or even hostile toward the leader who oversaw the fall of the Soviet Union, which heralded a period of deep economic hardship and identity crisis in Russia. As Gorbachev continues to lean to the west, has Russia turned its back on his legacy forever?

An exhibition of photographs titled “Mikhail Gorbachev: Perestroika” is currently on display at the Manezh Exhibition Hall. The central location opposite the Kremlin has led some to say that there is a growing acceptance of Gorbachev in Russia. But the exhibition is located on the bottom floor, underneath a honey fair and sharing space with a large sale of fur coats.

The exhibition begins with a striking young Gorbachev wearing a fedora, before moving quickly to his early days leading the Soviet Union. “There was a lot of hope in this period, when Gorbachev first became the head of the party and many younger people saw an opportunity for change. I myself was hoping for more possibilities to travel,” said Natalya, a lawyer from Moscow who has taken a day off to come see the exhibition.
When Gorbachev came to power, he succeeded Konstantin Chernenko, the third in a line of elder Secretary-Generals that had seen Russia through a period of prolonged economic stagnation. Gorbachev unleashed a series of reforms over several years, which were designed to revitalize the Russian economy and encourage more open political and social debate. The result was an upheaval of the Russian economy and a rapid evolution of Russian society.

“Gorbachev’s time was a period of change – not so much of environment because when his time began there was nothing on the shelves in the market and when it ended there was still nothing on the shelves – but what happened in people’s consciousness was a colossal change in direction,” said Olga Sviblova, Director of the Moscow House of Photography and curator of the exhibition. “What had earlier been forbidden, say a certain hairstyle worn to an event, was suddenly allowed and in Gorbachev’s time everything began to flower. And people, like mushrooms after a heavy downpour, begin to peek out from below ground.” Along the walls, young people with spiked haircuts and track suits begin to appear, but they are next to pictures of the homeless and long lines in front of shops – all reminders of the economic turmoil that accompanied social change.
By the early 1990s, the economic reform policies had taken their toll and criticism, now openly permitted, was mounting. A critical shift of power in Russia took place when political hard-liners attempted, and ultimately failed, to stage a coup in August 1991. Boris Yeltsin, then head of the Russian Soviet government, famously gave a speech from a tank turret against the leaders of the putsch, while Gorbachev was held under arrest at his dacha and returned to find the coup suppressed but his own authority severely compromised.

In a color photograph near the end of the exhibition, Gorbachev stands in front of the jet that brought him back from his dacha after the coup. He is flanked by a pair of journalists holding microphones. Gorbachev wears a deep frown through pencil-thin lips and stares at the ground in front of him. “I think he knows it’s over,” said Dmitry Nikolayev, a young graduate student at the exhibition.

“One aspect of Gorbachev’s legacy which is still relevant to Russian politics is what I would call Perestroika syndrome,” said Fyodr Lukyanov, the editor-in-chief of Russia in Global Affairs.  “When the current Russian leadership witnessed with its own eyes what happened in the late 1980s and early 1990s, and they experienced how quickly it can go from very good intentions to total collapse, they became paralyzed to change. They are afraid that if they start to change a system which is showing signs of stagnation already, they could end up like Gorbachev did.”
But Gorbachev found his way back into Russian headlines recently when he attacked Vladimir Putin for conducting an “imitation” democracy and accused him and Dmitry Medvedev of leading the country back into a Soviet style system of one-party rule under United Russia. This criticism shows an important break for Gorbachev, who supported Putin in an interview with The Times in 2007. “He brought stabilization to Russia,” said Gorbachev at the time. “Not everyone would have been able to cope with the kind of legacy that he inherited from Boris Yeltsin.”

But Gorbachev’s political criticisms don’t carry much weight, and so far he has not succeeded in establishing an independent political party, despite several attempts.

Gorbachev’s larger problem may lie in the fact that while he was integral in the fall of the Soviet Union, he did not play a role in building its successor state, Russia. “The problem with the perception of Gorbachev is that he is seen as the person whose actions led to the destruction of the country they considered to be their natural home,” said Lukyanov. “Yeltsin might be seen in the future as the creator of the new Russian state. Not only as the destroyer of the Soviet Union, but a creator of the Russian state. But unfortunately Gorbachev as a political result will retain a negative association.”

Nonetheless, the exhibition at Manezh inspires a sense of nostalgia among visitors. “I admire him, I think mostly for the fact that he was able to simply give up power,” said Dmitry. But whether he may be able to one day regain his lost status remains to be seen. “I’m absolutely sure that he’ll be revered one day,” said Natalya. “I hope I live to see it.”