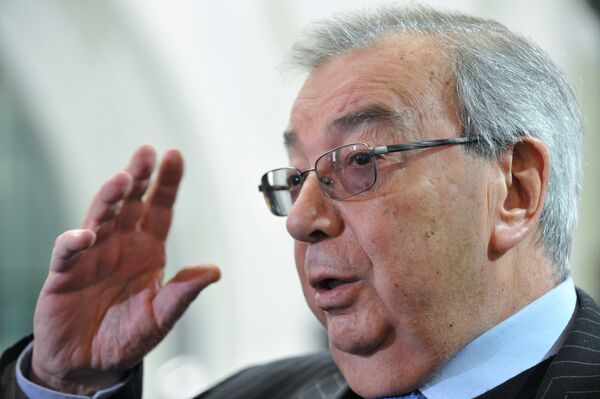 Inspired by recent popular revolutions in Tunisia and Egypt, demonstrators have come out in force in Libya to protest the 40-year authoritarian rule of Muammar Gaddafi. Reports suggest that over 1,000 people have been killed in clashes between protesters and pro-Gaddafi forces.

"Nobody should be getting involved in these events," Primakov, who recently resigned as the head of Russia's trade council, told a news conference on Monday.

"It is important to understand the mentality of the Arab people and the history of the Arab countries... foreign military intervention [in the region] is often counter-productive," he added.

He also called the sanctions imposed on Libya by the UN Security Council a "sufficient" response to the crisis.

Primakov said it was difficult to assess how the events in Libya would proceed, as a significant part of the population remains loyal to Gaddafi.

The former prime minister dismissed rumors that the wave of unrest in North Africa might take root in Russia.

"I doubt demonstrations in Oman or Bahrain, or even the revolution in Egypt, will have any effect on the situation in our country," Primakov said. "But if Islamists push for power there, which I doubt, it might have an influence on the North Caucasus."

Russia has been fighting terrorists in the mainly-Muslim North Caucasus republics for over a decade. Random attacks are frequent in the region and have spread to Moscow and other parts of Russia on numerous occasions.