Comeback win fires Zenit into next round of Europa League 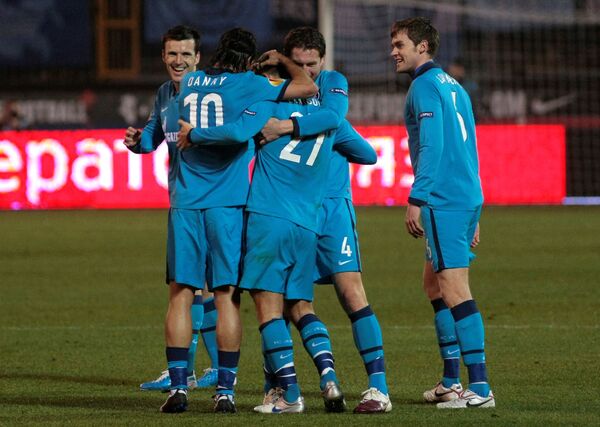 Zenit St. Petersburg became the second Russian side to reach the Europa League round of 16 after a come-from-behind win against Young Boys Bern in Russia's second city.

Zenit St. Petersburg became the second Russian side to reach the Europa League round of 16 after a come-from-behind win against Young Boys Bern in Russia's second city on Thursday night.

Down 2-1 from the first leg in Switzerland, the Russian champions went further behind after 21 minutes when Ammar Zhemal headed in after Mario Raimondi's bounced across the six-yard box.

Zenit kick off the defense of their Russian Premier League crown in three weeks time against Ruud Gullit's Terek in Grozny and the rustiness evident in Bern last week was still on show, but gradually they came into the game, drawing level on the night four minutes before halftime.

Russia international Konstantin Zyryanov found space in midfield and slipped a perfectly weighted through-ball beyond the despairing lunge of Argentine defender Emiliano Dudar. Serbia's Danko Lazovic didn't even need to take a touch before scoring past Marco Wolfli in the Young Boys' goal.

The St. Petersburgers stepped up the pressure after the break and the visitors were quickly overwhelmed, the experienced Sergei Semak taking a touch before firing home left-footed when a deep cross found him all alone at the far post in the 52nd minute.

That brought the 2007 UEFA Cup winners level on aggregate and the only surprise was that it took another 24 minutes to take the lead, Roman Shirokov slamming the ball high into the net after the Young boys defense again failed to deal with a deep cross from the left wing.

The Swiss still only needed an equalizer to send them through on away goals, and threw everything at the home side, hitting the post in the 85th minute and forcing a smart save from Igor Malafeev as the final whistle approached.

Zenit held on to join CSKA Moscow in the next round, where they will play either Rubin Kazan or FC Twente, with the Dutch champions strong favorites after their 2-0 win in the first leg in Tatarstan.