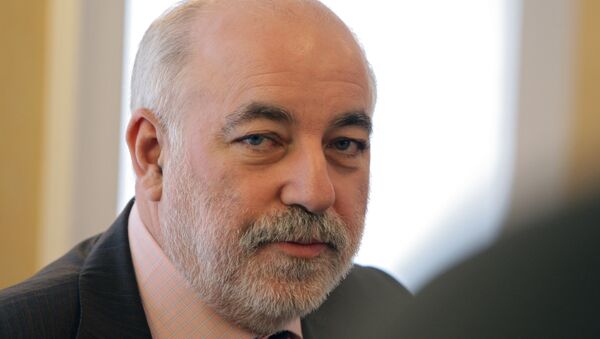 © Sputnik / Aleksei Druzhinin
/
Go to the photo bank
Subscribe
Russian billionaire Viktor Vekselberg has agreed with the Vatican to host a display of precious works by Faberge on Easter.

Russian billionaire Viktor Vekselberg has agreed with the Vatican to host a display of precious works by Faberge on Easter.

Before the Russian Revolution in 1917, Carl Faberge's jewelry company in St. Petersburg manufactured ornaments and baubles for Russia's imperial family. The most famous of his works for the tsar's family were Easter eggs encrusted with gems.

"We are happy and proud that we were able to organize such an exhibit," Vekselberg said.

He said his Link of Times foundation held talks with the Vatican for over one year in order to hold the exhibition in the Holy See's museum. He said the talks were long because the museum had high demands for the collection.

The exposition will open on April 14.

"Specialists from the Vatican chose the collection for the exhibition. There will be 180 exhibit pieces showing the history of Russia and the tragic history of the tsar's family because several of the items were prepared from orders by Nicholas II who tragically died," Vekselberg said.

Since 1885, the House of Faberge created 54 Imperial eggs for Alexander III and Nicholas II as gifts for their wives and family. Only 42 of these elegant eggs remain today.

Vekselberg purchased a collection of Faberge's works from the Forbes family in 2004. The collection consisted of nine Imperial Easter eggs and another 190 items, including brooches, inkwells and smoking accessories. Vekselberg said he paid over $90 million for the collection.