London activists try to pass on 'presents' to Medvedev, Putin 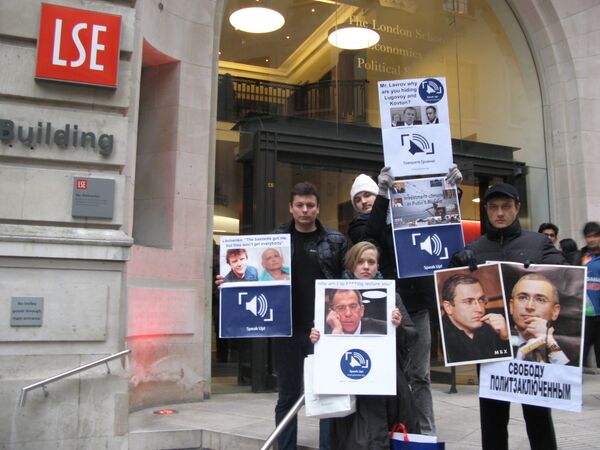 The Speak Up! movement activists approached Lavrov after he gave a talk at the London School of Economics.

They said they also asked Lavrov to pass their presents on to former KGB agent Andrei Lugovoi, suspected by UK investigators of the 2006 poisoning of Russian exile Alexander Litvinenko with the radioactive substance polonium-210.

"To Andrei Lugovoi we send real English tea, a bundle of grass [Lugovoi's name means 'meadow'] without polonium, to Putin we send the [Russian] constitution and a magnifying glass," the movement said in a statement.

President Medvedev was treated to a note saying "Free Khodorkovsky and Lebedev."

Already in detention since 2003, former oil tycoon Mikhail Khodorkovsky and his business partner Platon Lebedev were sentenced to another six years in prison in a politically tinged trial in December.

Lavrov said the presents will reach their addressees.