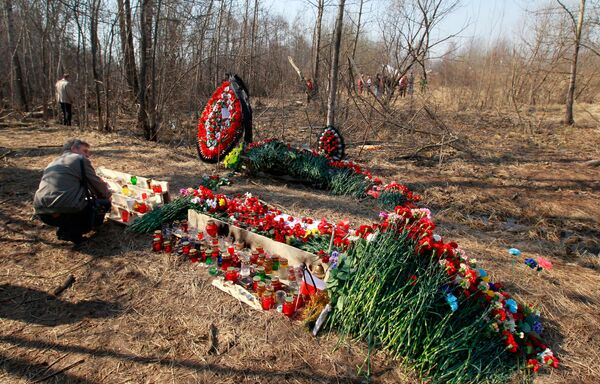 Russian and Polish investigators will continue a joint probe into the crash of late president Lech Kaczynski's plane, the Russian Foreign Ministry said on Monday.

"Both sides reiterated their readiness to continue close cooperation in investigating the causes of the Smolensk air crash," the ministry said.

Earlier in February, Polish military prosecutors in Moscow questioned two Russian air traffic controllers from the airport where Kaczynski's plane crashed in April 2010 and said they planned to interview more witnesses as they believe that the pilots were not given vital information on weather and other conditions as they approached Smolensk on April 10.

The Polish Interior Ministry has said it will delay the release of a report on the causes of the plane crash until late March.

Lech Kaczynski, his wife and dozens of high-ranking Polish officials were killed when their Tu-154 plane crashed near the Russian city of Smolensk while landing in thick fog.

The Moscow-based CIS International Aviation Committee (MAK) released a report on January 12, citing pilot error as the main cause of the tragedy. Polish experts and officials have criticized the report, saying it lacks evidence.

Jaroslaw Kaczynski, a Polish opposition leader and the late president's twin brother, has blamed Russia for the tragedy.