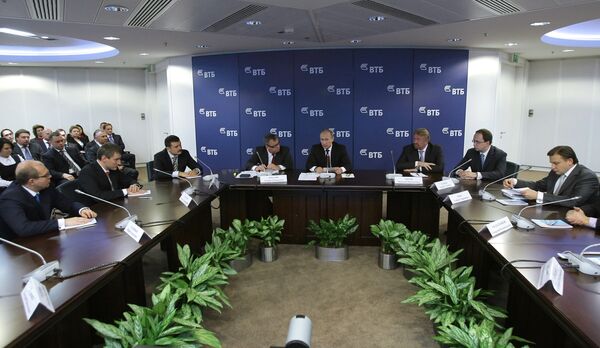 © RIA Novosti . Alexey Nikolsky
/
Go to the mediabank
Subscribe
International
India
Africa
Russia launched its massive privatization program on Monday by raising about 96 billion rubles ($3.3 billion) from the sale of 10% in the country's second largest bank VTB at market price.

Russia launched its massive privatization program on Monday by raising about 96 billion rubles ($3.3 billion) from the sale of 10% in the country's second largest bank VTB at market price.

"Thanks to a considerable interest from Russian and international investors, the offer was more than two times oversubscribed, helping sell the shares at a price corresponding to current market realities...The sale of shares of the aforementioned bank became the most successful placement of equity capital on the Russian market in post-crisis history," the government said in a statement.

Investcafe brokerage house said in a research note that over half of VTB shares had been acquired by funds with a long-term investment horizon and a third by sovereign funds and strategic investors.

"This makes us assume that the bulk of the stake will not get to the market in the middle term to create a surplus offer, helping securities rebound to over 10 kopecks per share in the nearest future," the note said.

Prime Minister Vladimir Putin said the placement was successful and brought good results, adding the deal would benefit both VTB and the country's financial system as a whole.

He warned VTB head Andrei Kostin that "investor interests must be carefully observed".

In 2007, VTB held Russia's first "people's IPO", when shares were sold to households for 13.6 kopecks. After the placement the price fell 80% and never rebounded.

"Many reputable companies in the U.S., Europe, Middle East and Asia have invested in the Russian economy on such a large scale for the first time," the government said.

"The placement was preceded by numerous meetings of government and VTB officials with more than 170 foreign companies and funds, which have demonstrated great interest from Russian and international investors not only to VTB, one of the most promising international banks, but also to the entire Russian economy, which is confidently recovering from the global crisis," the government said.

The state hac planned to sell 35% minus one share in VTB in 2010-2013, but failed to sell a 10% stake to a pool of investors led by TPG fund for $3 billion last year. TPG is expected to buy VTB shares worth $100 million, while Italy's insurance company Assicurazioni Generali was interested in buying 1% of the bank for $300 million.

"The legislative work we have done helps make the current privatization process more transparent and efficient," said the government, which now owns 75.5% of VTB.

"This, in turn, will help the government raise as much money from asset sales as possible. In this sense, the sale of VTB shares to new rules became a pilot project and an example for further privatization deals."

The government plans to sell another 10% of VTB this year and 15% minus one share next year.

In the banking sector, the government also plans to privatize 7.6% percent of the country's top bank Sberbank. Its boss, German Gref has said the sale will start in the second half of the year.

The state could sell 25 percent in wholly state-owned Rosselkhozbank by 2015, an agricultural lender and one of the top five Russian banks by assets.