Playing games with democracy in Kazakhstan 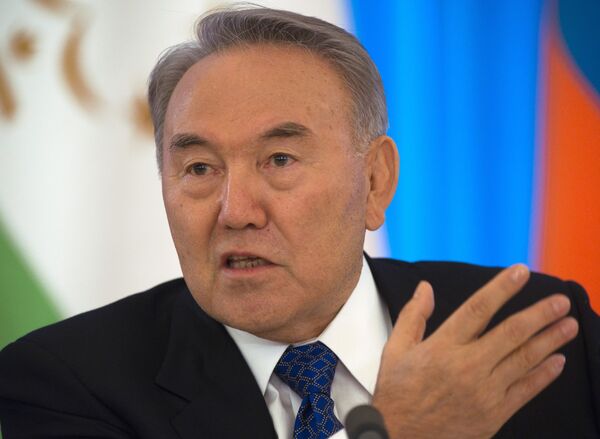 © RIA Novosti . Sergey Guneev
/
Go to the mediabank
Subscribe
International
India
Africa
Kazakh President Nursultan Nazarbayev was lauded in the West late last week when he made his "democratic" decision to hold early presidential elections in the country instead of a proposed referendum prolonging his presidency until 2020.

Kazakh President Nursultan Nazarbayev was lauded in the West late last week when he made his "democratic" decision to hold early presidential elections in the country instead of a proposed referendum prolonging his presidency until 2020.

Nazarbayev's move, seemingly unexpected but in fact well though-out, put an end to the weeks-long political tug-of-war initiated by allies of Kazakhstan's veteran leader in a bid to guarantee him a third decade in power.

Nazarbayev, 70, announced early polls after backing - in a sign of goodwill - the Constitutional Council's ruling that holding the referendum would run against the constitution, although he has the right to veto the decision. Washington and the European Union were quick to praise the "right" move, which Nazarbayev described without false modesty as a "historic lesson in democracy."

There is little doubt that the forthcoming election, scheduled for April 3, will result in another term for Nazarbayev, who has ruled Kazakhstan since the breakup of the Soviet Union. The Kazakh opposition is weak and divided, and experts say it is likely to fail to agree on a common candidate to challenge the incumbent, who has already expressed his readiness to run in the elections.

Several Kazakh opposition parties have already announced that they would not put up candidates for the elections, admitting that they were unlikely to succeed. That view was supported by the presidential aide, Yermukhamet Yertysbayev, who said last week that the opposition has "absolutely no chance" of getting even 10 percent of the vote.

Meanwhile, a special linguistics commission has been working hard in the republic to evaluate the presidential candidates' knowledge of Kazakh language - the country's laws require them to speak frequently the national language besides Kazakhstan's most widespread Russian. "Insufficient" language skills sometimes become a reason for rejecting candidates' presidential bids, as happened on Tuesday with Ualikhan Kaisarov, an independent candidate who managed to pass the test ahead of the 2005 presidential polls.

Russian experts agree that Nazarbayev's choice of early elections was a smart strategic and propagandist move, which was made in the right time.

"Nazarbayev, as an experienced and forward-looking politician, has made a quite serious and strong decision," said political analyst Viktor Nadein-Rayevsky, a senior fellow of the Russian Academy of Sciences' Institute of World Economy and International Relations.

Nazarbayev, who polls suggest is popular in his country, has also gained strong authority in the international arena. He secured the right for Kazakhstan to chair the Organization for Security and Cooperation in Europe in 2010, when the country hosted an OSCE summit in Astana, as well as several other important international events.

Kazakhstan, an oil and gas-rich country that has long been an example of prosperity in Central Asia, has managed to keep its economy respectively stable in the face of the global economic crisis that hit other regional countries hard.

Nadein-Rayevsky warns, however, that in the near future the Kazakh authorities will have to face the need to modernize the country's political and market structures. He says this necessity directed Nazarbayev's attempts to increase his legitimacy, adding that the president was "standing firm on this path."

The early elections, which will take place just two months after being announced, will allow Nazarbayev to kill many birds with one stone, experts say.

First, to ensure the opposition will not be able to put obstacles in the way of the expected reforms so Kazakhstan will continue along its current political course.

Second, to put a stop to speculation about a a successor, which has long cast a shadow over the country.

"The prospect of Nazarbayev's exit from the political arena has been an issue of deep concern in Kazakhstan," said senior Russian lawmaker Konstantin Zatulin, deputy head of the Russian parliamentary committee in charge of relations with the Commonwealth of Independent States (CIS).

"This situation has stressed the political elite...unnerved the population and Nazarbayev himself," Zatulin said, adding that this was apparently a reason behind the initial referendum proposal and the subsequent idea of early polls.

"It was important to prevent the erosion of power," the lawmaker said.

Third, by choosing early polls over a referendum, Nazarbayev boosted his image as a "democratic" leader in the West. Western powers had warned that holding the referendum would be step back for Kazakhstan's democracy.

The announcement of early polls was a "very smart move from a propagandist view because it raised a wave of praise both in Kazakhstan and abroad," Zatulin says.

It also allows the Kazakh president to demonstrate that he was not afraid to put his authority to the test, Zatulin says, noting that if there was even a small challenge to Nazarbayev, he would not "play games with democracy" by risking early polls.

Analyst Nadein-Rayevsky says these "games," which also included the "forcible" granting of the "Leader of the Nation" title that the parliament bestowed upon Nazarbayev last year after another tug-of-war between lawmakers and the president, seem strange to the West, but do not raise questions inside the country. "Both the Kazakh and Russian public perceive such an approach as normal," he says.

Stability in Kazakhstan is in the interests of both Russia, whose border with the republic stretches for thousands of kilometers, and Western powers, experts say. Even a small possibility of unrest spreading beyond the Middle East to Central Asia scares Western governments.

"Cooperation with Kazakhstan is very significant for the West. An important part of the United States' foreign policies is the estrangement of Cenral Asian republics from Russia, which is proved by recent Wikileaks cables," Nadein-Rayevsky says. "So far, Russia has managed to oppose these attempts. Moreover, it has made a serious progress in economic rapprochement with Kazakhstan within the Eurasian cooperation project, of which Nazarbayev is one of the main architects."

Some critics say that although the United States and European nations have been trying to stress their support for democracy in Central Asia, in practice, it is much easier for them to deal with autocratic regimes in the region than with democratic governments.

But the moment when a decision will have to be made on the future of the political system built by Nazarbayev is approaching.

"There is a range of problems that have been removed from the agenda by Nazarbayev's successful manipulations," Zatulin said. "But if Nazarbayev leaves the office, they may emerge again. The problems include the language issue, regional self-governance, and the issue of genuine democracy, which Kazakhstan certainly lacks."