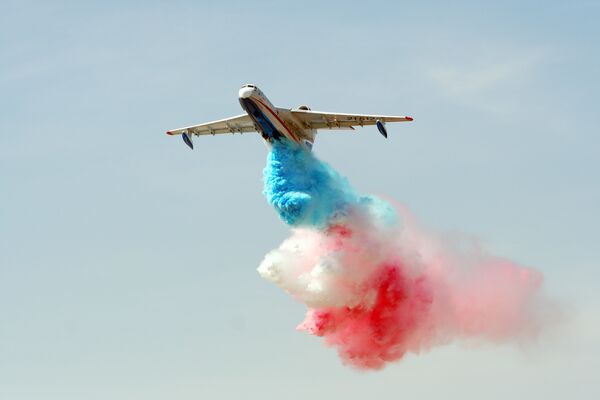 © RIA Novosti . Valery Yarmolenko
Subscribe
Russia will exhibit over 80 types of weaponry at the upcoming Aero India 2011 air show, state-run arms exporter Rosoboronexport said in a statement, but the MiG-35 fighter jet will not take part.

Russia will exhibit over 80 types of weaponry at the upcoming Aero India 2011 air show, state-run arms exporter Rosoboronexport said in a statement, but the MiG-35 fighter jet will not take part.

Aero India-2011, which will be held in the southern city of Bangalore on February 9-13, is expected to attract the record number of over 600 manufacturers, vendors and suppliers from 63 countries.

Russia will be represented by 35 companies, including aircraft manufacturers MiG and Sukhoi, and air defense systems producers Almaz-Antei and Engineering Design Bureau (KBM).

Russia will promote its MiG-35 and Su-35 fighter jets, the Yak-130 combat trainer, two versions of the Il-76MD transport plane (with different engines), the Il-78MK aerial tanker and MiG-29K and MiG-29KUB naval fighters.

However, the MiG-35, which is a candidate in an Indian Air Force tender for 126 light fighter aircraft, will not take part in the show, MiG representatives in Delhi told RIA Novosti last week. Indian press articles last year claimed that the aircraft had unofficially been dropped from the shortlist of aircraft being considered,which Russian aerospace holding UAC denies.

The Be-200 amphibious aircraft will most likely be one of the top attractions of the Russian exhibit as its popularity with foreign customers steadily grows. The Be-200 can be used in a wide variety of roles, from maritime reconnaissance and rescue to firefighting.

The visitors will also be able to receive information about the Mi-35M combat transport helicopter, the Kamov Ka-31 radar surveillance helicopter and the Ansat and Kamov Ka-32A11BS multi-role helicopters.

The air defense part of the Russian exhibit will be represented by the Tor-M2E, the S-300VM, the Buk-M2E and the Tunguska-M1 systems.

Russia is the world's second largest conventional arms exporter after the United States. In 2010, Russian defense industry companies delivered about $10 billion worth of arms to foreign customers.