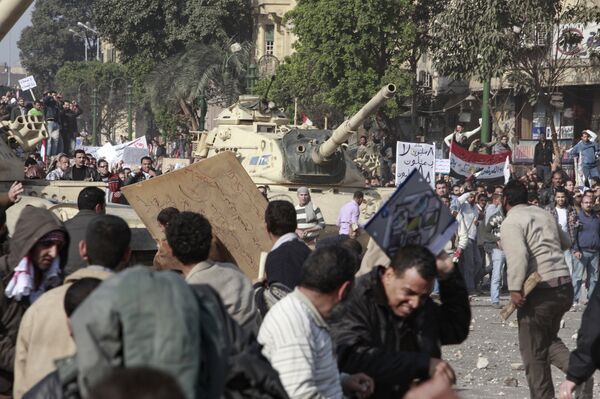 "We have said clearly that we have no ambitions to run for the presidency, or posts in a coalition government," he said.

The Muslim Brotherhood has been under the spotlight amid mass anti-government protests in Egypt, which broke out on January 25. The disorder has already claimed the lives of up to 300 people, with another 4,000 reported injured. A number of observers have voiced concern that the banned Islamic movement could eventually take power in Egypt.

Saying that government representatives had invited the Muslim Brotherhood to talks on political reform, al-Beltagi hinted that the group would receive official recognition as a party.

"We are ready to negotiate after [the end of] the [president Hosni] Mubarak regime," al-Beltagi said.

The deeply conservative Islamic movement, which wants to move Egypt from secularism and return to the rules of the Quran, failed to win a single seat in the 2010 Egyptian parliamentary elections.

Meanwhile, thousands of Egyptians gathered in central Cairo on Friday to take part in a mass rally dubbed "Friday of Departure."

Egypt's Defense Minister Field Marshal Mohamed Hussein Tantawi and other high-ranking military officials arrived in Tahrir Square to talk to soldiers who are maintaining order at the site, the scene of violent clashes over recent days.

The opposition hopes to bring over a million people on the streets of major Egyptian cities to force Mubarak to step down.