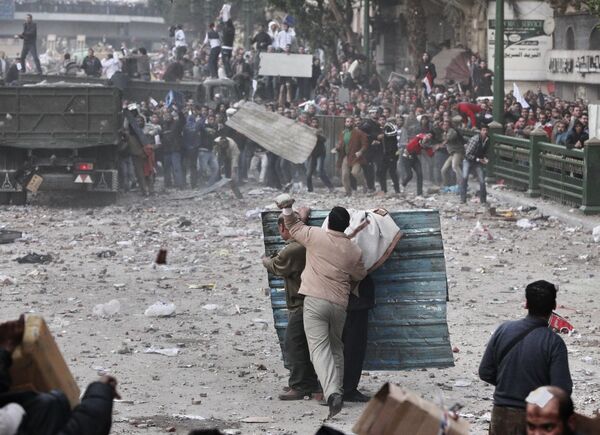 Egypt's banned Muslim Brotherhood movement has unveiled its plans to scrap a peace treaty with Israel if it comes to power, a deputy leader said in the interview with NHK TV.

Egypt's banned Muslim Brotherhood movement has unveiled its plans to scrap a peace treaty with Israel if it comes to power, a deputy leader said in an interview with NHK TV.

Rashad al-Bayoumi said the peace treaty with Israel will be abolished after a provisional government is formed by the movement and other Egypt's opposition parties.

"After President Mubarak steps down and a provisional government is formed, there is a need to dissolve the peace treaty with Israel," al-Bayoumi said.

Egypt was the first Arab country to officially recognize Israel and sign a peace agreement with the Israeli government in 1979. It is also a major mediator of the Israeli-Palestinian conflict.

The Muslim Brotherhood has recently come to light amid mass anti-government protests in Egypt. Some media voiced concerns that the banned Islamic movement could eventually take power in the riot-hit Arab country.

The deeply conservative Islamic movement, which wants to move Egypt from secularism and return to the rules of the Quran, failed to win a single seat in the 2010 Egyptian parliamentary election.

The Muslim Brotherhood joined the anti-government protests in Egypt last week. The unrest, seen by many analysts as a major threat to repressive governments in the region, has already claimed the lives of at least 300 people and injured several thousand.