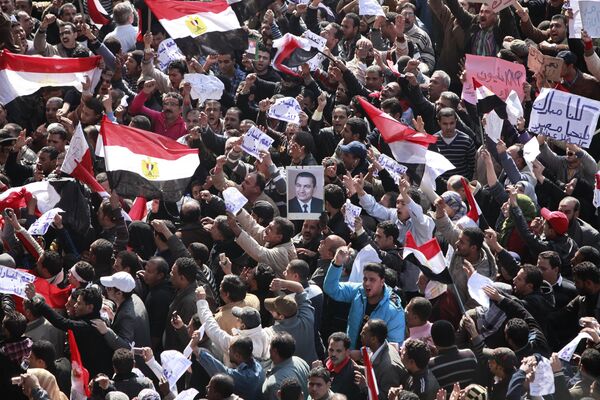 Thousands of presidential supporters arrived at downtown Cairo's Tahrir Square on horses and camels on Wednesday and clashed with opposition protesters. Both sides attacked each other with stones.

The vehicles were deployed early on Thursday after the supporters of the embattled Egyptian President Hosni Mubarak allegedly opened fire at anti-government protesters, Al Arabiya said.

Earlier reports said the army had refrained from interfering in the protests.

At least five people were killed and over 800 injured in Wednesday's clashes, the country's Health Ministry said. Some reports claimed up to 1,500 people were injured.

Media reports said opposition protesters have taken control of the Sadat metro station near Tahrir Square and use it as an improvised jail for their captured opponents.

The Egyptian opposition has dismissed a vow by the veteran President Mubarak to step down when his term of office ends in September, saying they want his immediate resignation.

Anti-government protests, which saw hundreds of thousands of demonstrators demanding President Mubarak's resignation, broke out in Egypt last week. The unrest, seen by many analysts as a major threat to repressive governments in the region, has already claimed the lives of at least 300 people and injured several thousand.