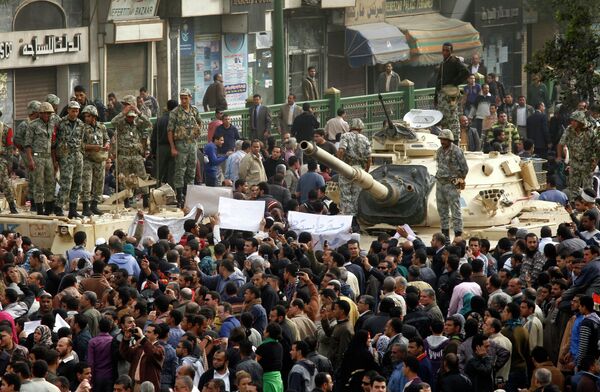 It’s another country, another capital with streets full of angry protesters, another longtime regime under popular assault led in large measure by Internet-savvy youth.

It’s another country, another capital with streets full of angry protesters, another longtime regime under popular assault led in large measure by Internet-savvy youth. In Egypt today, the power of social networks to spur political change has again been brought to the fore, with users this time finding new ways to circumvent state efforts to halt Internet communication.

Events in Tunis last month were the latest spark for protest in many Arab countries, most importantly Egypt , following similar upheavals in the past – notably Iran’s 2009 “Twitter Revolution,” so named for the use of the popular micro-blogging service in organizing anti-government demonstrations. Mindful of the Iran precedent, one of the first things the authorities in Egypt did last week -- alongside deploying riot police and the army on the streets -- was to disable Internet and mobile phone communications in a futile effort to nip the unrest in the bud.

This time however, and for the first time on such a scale, technology-minded protesters quickly began devising methods for circumventing the obstacles to Internet and mobile communications erected by the Egyptian government and finding new routes to social sites like Facebook, Twitter and others. Social network user “status updates” such as this one – public guidance for the protesters -- began cropping up on sites: “OUR DSL IS STILL WORKING IN EGYPT USING DIAL UP 0777 7776 or 07777 666 Share with every one asap #Egypt #25Ja.”

Such messages were transmitted, providing instructions on how to dial up a phone number to connect to the Internet and bypass government controls. When domestic Internet connections were completely shut down, such updates were sent from Egyptians living abroad or from other Arab social network users living outside the country who support the protesters in Egypt, helping independent media get the news out on television and newspapers.

User-generated video has also played an instrumental role in promoting real-time awareness of events in Egypt that the state was scrambling to contain. Here’s an example of one of the most dramatic posts of this type, a snippet from YouTube user "freeegypt" showing a man standing in front of a military vehicle.

At the same time, Twitter has been used to organize the actual movement on the ground for the protesters with tweets calling on people to gather in specific places at specific times and giving up-to-date advice on which roads in cities to take and which to avoid. Other tweets were used to provide running commentary on events as they were taking place, such as this sequence from a journalist at the scene of the protests:

When the last Internet operator in the country was ordered to shut down all service, Google and Twitter joined hands to establish three mobile phone numbers (one in the United States, one in Italy and one in Bahrain) for people to call and record their tweets as a voice message. Users were instructed to log on to Twitter and listen to tweets rather than reading them, as usual. The new “audio tweets” instantly gave this content a more personal feel as users could hear the voice of the tweeter and surrounding background noise. It was the first time that leading Internet search engines and social media combined forces amid widespread upheaval to keep information flowing despite state efforts to contain it and shape the public narrative.

Whether the Egyptian authorities enhanced or diminished state security by trying to shut down Internet and mobile communication networks (some argue that cutting off communications leaves people with no option other than to take to the streets en masse) is a topic likely to be debated for years to come. But no one disputes the crucial role social networks have played in the events unfolding in Egypt.

"In the case of Egypt, it really played a critical factor in getting the word out," said CNN correspondent Mohammed Jamjoom, quoted on The Atlantic Wire website. "We can see that these sites were used in order to get the word out about how to bypass checkpoints, how to get across bridges, how to get to places where people wanted to demonstrate.”

Whether social media have helped or hindered protesters in Egypt, the events of the past week there have underscored the fact that both pro- and anti-government activists throughout the Middle East are making the most of social networking tools to organize and promote their causes in real time to mass audiences.

Jon Stewart, an American comic, television commentator and activist, offered a sardonic quip that in many ways captures the transcendent power of social media in the Middle East.

"If two speeches and a social media site is all we needed to spread democracy then why did we invade Iraq? Why didn’t we just, I don’t know, ‘poke’ them," Stewart said, using the Facebook term for getting a user’s attention.

(Rateb Joudeh is the editor for the Internet edition of Anbaa Moscow, an Arabic-language newspaper based in Moscow. A new online edition is planned for launch later this year)