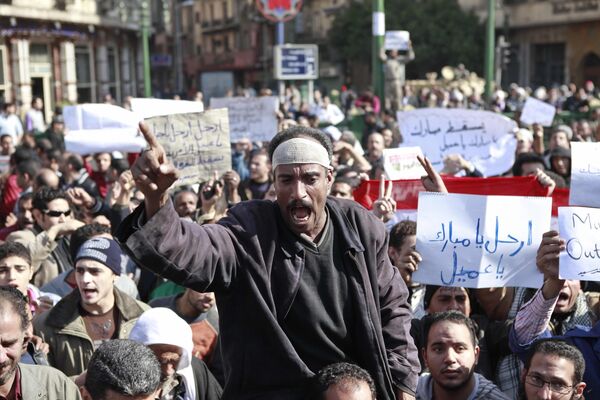 © RIA Novosti . Andrei Stenin
/
Go to the photo bank
Subscribe
Thousands of Egyptian protestors plan to spend the night on Cairo's main Tahrir Square regardless of the state curfew in the run-up to a mass rally on Tuesday that some say could reach over one million people, a freelance journalist in the capital told RIA Novosti.

Thousands of Egyptian protestors plan to spend the night on Cairo's main Tahrir Square regardless of the state curfew in the run-up to a mass rally on Tuesday that some say could reach over one million people, a freelance journalist in the capital told RIA Novosti.

Egypt has been engulfed in violent protests since January 25 against President Hosni Mubarak's 30-year regime, with demonstrators demanding economic and political reforms. Some 150 people have been killed and another 4,000 have been injured, the Al-Jazeera TV channel said.

"People were holding signs today rejecting measures taken by Egyptian President Hosni Mubarak and the new government," the stringer, who requested to remain anonymous, said on Monday, adding that protestors are insisting Mubarak step down.

Mubarak has so far rejected calls from protesters to resign.

He also said that Monday's protests in the capital were organized in comparison with the "spontaneous protests" in Cairo over the last week.

He said opposition parties have organized areas for food and water on Tahrir Square. Tuesday's protests are scheduled to begin at 10:00 a.m. local time.

A RIA Novosti correspondent said that the capital's main square has been cordoned off with barbed wire and military personnel are standing idly by, while helicopters often fly over the downtown area.

Egyptian Vice-President Omar Suleiman has proposed a plan aimed at solving the current political crisis in the country, which includes the resignation of President Hosni Mubarak, a local newspaper said earlier on Monday.

According to the Al-Shorouk independent newspaper, Suleiman proposes five important steps to solve the crisis, which include a major reshuffle in the leadership of the ruling National Democratic Party and the resignation of Mubarak, 82, who has led the country since 1981.

Mubarak appointed Suleiman, the former intelligence chief, to the post of vice president last Friday, following a wave of anti-government protests that have swept through the country in the past week.

Mubarak unveiled a new cabinet earlier in the day with key ministers retaining their positions.