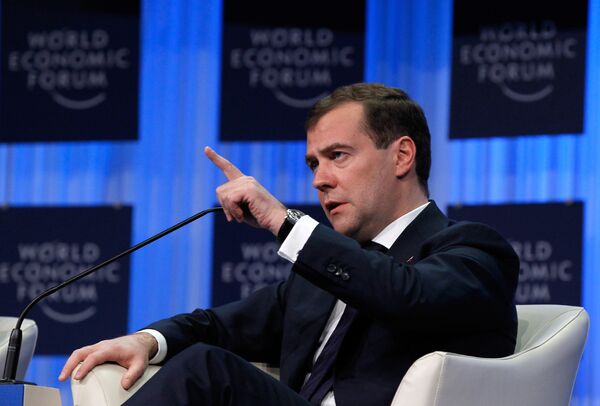 © RIA Novosti . Dmitri Astakhov
/
Go to the photo bank
Subscribe
President Dmitry Medvedev identified key priorities of his ambitious plan to modernize Russia in a speech Wednesday at the World Economic Forum in the Swiss resort town of Davos.

President Dmitry Medvedev identified key priorities of his ambitious plan to modernize Russia in a speech Wednesday at the World Economic Forum in the Swiss resort town of Davos.

Initially, the Russian leader was expected to deliver a keynote speech at Davos and to then attend several panel discussions on the forum's sidelines. But he decided to cut short his stay owing to the suicide bombing at Moscow's Domodedovo airport on Monday. He took a flight back home just a few hours after his arrival in Switzerland.

Dmitry Medvedev made Russia's modernization plan the centerpiece of his speech at Davos to reassure the world's largest gathering of business leaders that the investment climate in Russia is improving.

"Russia still faces quite a few difficulties in establishing rule of law and building a modern, efficient economy," he said. "But we are undergoing dramatic changes and we are moving forward."

Government stakes up for grabs

Medvedev's message to his audience in Davos was that Russia's bid to modernize will create new opportunities for doing business in the country.

One of the key priorities will be to privatize large government-owned companies in the financial and energy sectors, as well as some infrastructure assets. Toward this end, the Russian government's list of strategic enterprises, protected against foreign ownership, has been slashed by 80 percent.

"Minority stakes will be sold off and new portfolio investors will come on board, but the companies will continue to be managed the same way as before," argues Natalia Orlova, chief economist of Russia's Alfa Bank. "In other words, this privatization doesn't involve any major transformations in the structure of the economy or in the behavior of its key players."

This means that Russia's government will retain its key role in the national economy even after the planned selloff of some of its assets.

A special fund will be set up in Russia to help reduce risks posed by foreign investors, notably by introducing co-investment schemes. Under such schemes, intended for up to 10 years, corporate projects will be co-financed by private investors and the government, the Russian business daily Vedomosti reports. At least 20 billion roubles should be raised for the fund to begin with, says the paper, adding that over time the proportion of private investment should considerably surpass that of treasury allocations.

Russian authorities are not going to introduce any additional taxes on the financial sector in an effort to make Moscow a world financial center.

The abolition on January 1, 2011, of the tax on the sale of shares (or the capital gains tax) is expected to give a jolt to foreign investment in Russia. The Russian economy does need foreign capital. Admittedly, though, along with encouraging heavier direct investment (notably, in industrial production), a favorable taxation system may also draw more speculative capital onto the country's stock exchange.

According to Dmitry Medvedev, investors should be excited about the idea of creating a common Eurasian market, spanning the continent from the Atlantic coast to the Pacific, and operating under uniform, clear-cut rules. Russia's prospective accession to the World Trade Organization and to the Organization for Economic Cooperation and Development will help translate this idea into reality, he said.

The Russian president promised a favorable climate for innovative, high-tech entrepreneurship and venture capital in the country. He pushed his country's Skolkovo project as the most ambitious international high-tech project. "I'm sure we can expect new global brands to arrive in Russia in the years to come."

One striking example of such partnership is a recent deal between the British oil giant BP and Russia's Rosneft.

"Owing to a high degree of uncertainty and to the constant redistribution of property in the 1990s, Russian petroleum companies now lag some ten years behind in oil recovery technology," explains Valery Mironov, deputy director of the Russian School of Economics' Development Center. "Which is why they have to collaborate with foreign companies in offshore recovery and deepwater drilling."

Expanding broadband Internet across Russia will create greater opportunities for doing business in Russia, Medvedev said. Improved Internet connectivity will also make it easier for the business community to have direct contact with Russian government agencies, thus cutting down on corruption.

Improvements to infrastructure are crucial to modernization and attracting foreign investment, Medvedev said. Russia should make sure its infrastructure is accessible both to the business community and the public at large. Preparations for large-scale international sporting events, such as the Sochi Olympics in 2014 and the FIFA World Cup in 2018, are expected to give an additional boost to infrastructure development in Russia, he said.

A competent workforce is extremely importance to investors. Russia has already relaxed its migration laws to encourage qualified foreign professionals to come and work in Russia, and is willing to unilaterally validate foreign university diplomas and academic degrees.

On the other hand, the government expressed willingness to sponsor study-abroad programs for Russians aspiring to become civil servants, scientists and engineers.

Mironov warns, however, that additional investment in personnel training programs may fail to produce the desired effect, speeding up the country's brain drain instead.

"In order to encourage intellectuals to start their businesses here, in Russia, rather than leave upon completing a free study program, we will need to reduce existing bureaucratic barriers," he says.

Indeed, the risk of brain drain from Russia is still quite high.

"Developed countries seek to boost exports of industrial products, and demand for qualified engineers is constantly increasing. There're a lot of surveys indicating that developed countries will have to attract engineers from Russia, India and China in the next fifteen years, until they manage to readjust their own education systems."

The how and the what

Observers say the modernization priorities outlined by President Medvedev at Davos are all potential steps in the right direction, but that there is nothing new about them.

"These points migrate from one speech to the next, but it remains unclear just how they'll be executed and how the nation's leadership see the structure of this process as a whole as well as the order in which the unveiled plans should be implemented," Mironov says.

He holds that in order to dispel foreign investors' doubts about Russia, it is crucial to understand where this country should be heading. And that any modernization program should come with a clear-cut strategy.

As for Medvedev's program, in its current form it looks chaotic and disorderly, Mironov claims.

"All the points sound good enough, but it's unclear if they can be effectively implemented in Russia's present-day investment climate," says Natalia Orlova. In her view, the program does not envisage any measures to make the country more competitive. And "without enhancing its competitiveness, it'd be hard to see all the proposed mechanisms functioning properly," she believes.

Yelena Matrosova, director of the Center for Macroeconomic Studies at the company BDO, suggests that Russia should turn for advice to countries that have successfully modernized their economies. Modernization, according to her, it is not a Russian invention, and all the relevant "recipes" have already been "spelled out."

After WWII, modernization reforms were pursued in Japan, Germany, the UK, the United States, and China. Russia would be wise to draw on their expertise as it gets down to the task of charting a roadmap for its own modernization.