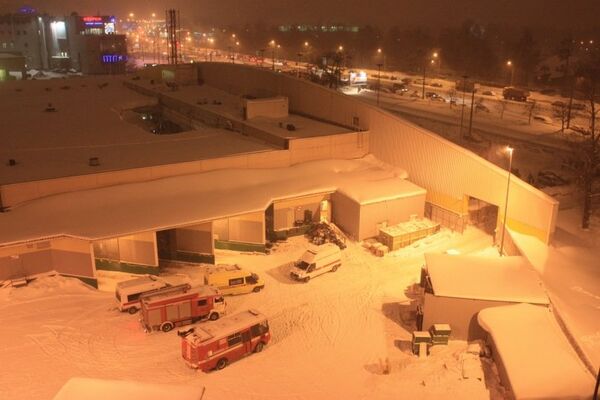 © Tatyana Novatskaya
Subscribe
One woman died and 13 people were injured when the roof collapsed under snow in a St. Petersburg supermarket on Tuesday.

One woman died and 13 people were injured when the roof collapsed under snow in a St. Petersburg supermarket on Tuesday.

Around 500 square meters of the roof collapsed in an O'Key discounter supermarket in a suburb of the northwest Russian city. The total surface area of the roof is 5,000 meters. The incident happened at around 8.40 p.m. Moscow time (17.40 GMT) when there were many shoppers inside.

Efforts to clear the rubble are underway, and are expected to continue into Wednesday morning.

The woman who died was a supermarket employee. Earlier it was reported that nine people were injured.

Nine ambulances and 17 firefighting crews arrived at the scene.

According to preliminary information, the collapse was caused by the breaking of a concrete construction holding up the glass roof. Heavy snowfall in St. Petersburg may have caused the accident.

A criminal case has been opened into violation of safety regulations during construction work.

A similar incident occurred two weeks ago in the same district of the city, when the roof of a sports complex collapsed under snow injuring two people.