One dead as roof collapses in St. Petersburg supermarket (Update 1) 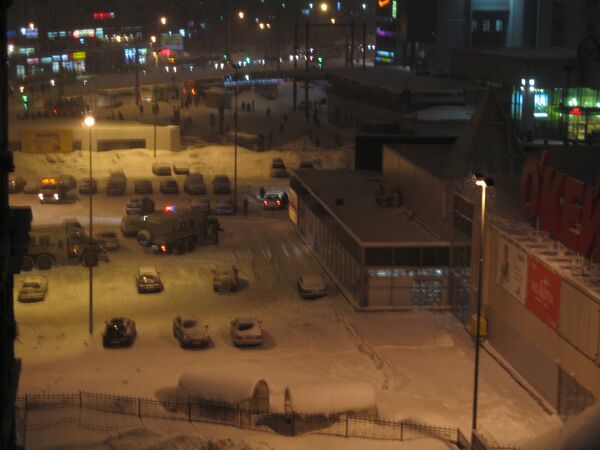 © RIA Novosti . Anastasia Ginevskaya
Subscribe
One person died and two were hospitalized when a roof collapsed in a supermarket in St. Petersburg on Tuesday, the local office of the emergencies ministry said.

One person died and two were hospitalized when a roof collapsed in a supermarket in St. Petersburg on Tuesday, the local office of the emergencies ministry said.

"Rescuers pulled a woman with severe wounds out of the rubble. Another eight people were taken away in ambulances," an emergencies ministry spokesman said, adding that one of those injured was in a critical condition.

Around 500 square meters of the roof collapsed in an O'Key discounter supermarket in a suburb of St. Petersburg, the ministry spokesman said. The total surface area of the roof is 5,000 meters.

The incident happened at around 8.40 pm Moscow Time (17.40 GMT) when there were a large number of shoppers in the store, an eyewitness said.

Nine ambulances and 17 fire engines have arrived at the scene. Machinery to clear the rubble is expected to be brought to the site soon.

According to preliminary information, the collapse was caused by the breaking of a concrete construction holding up the glass roof.

A spokeswoman for the supermarket did not comment on reports that heavy snowfall in St. Petersburg on Tuesday may have caused the accident.

Police have cordoned off the area surrounding the supermarket. A criminal case has been opened into violation of safety regulations during construction work.