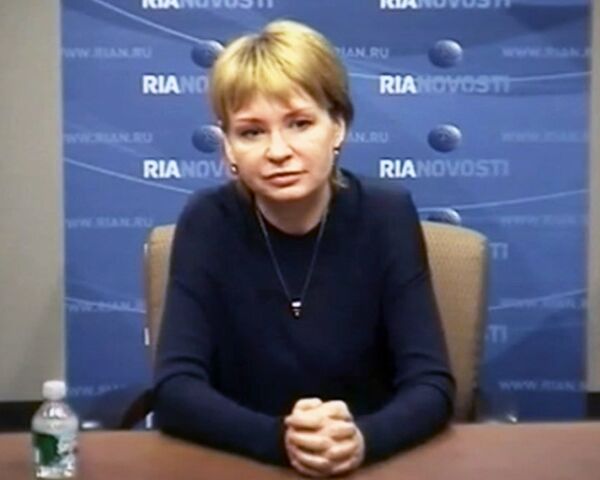 © RIA Novosti/Avrora Olga Tcarkova
Subscribe
The wife of alleged Russian arms dealer Viktor Bout described on Tuesday as a "political show" the U.S. authorities' decision to begin a trial against her husband on September 12, a day after the 10th anniversary of 9/11.

The wife of alleged Russian arms dealer Viktor Bout described on Tuesday as a "political show" the U.S. authorities' decision to begin a trial against her husband on September 12, a day after the 10th anniversary of 9/11.

She said the trial was set on this date to flaunt the results of U.S. efforts against terror and the costly anti-terrorism campaign pursued by the United States in the past decade.

"I support a fight against terror, but will not let it be carried out at the expense of my family," Alla Bout told RIA Novosti in a video linkup from New York.

Former Soviet military officer Bout was arrested in Thailand in March 2008 during a sting operation led by U.S. agents. He was extradited to the United States in November last year after spending more than two and half years behind bars.

Bout, 44, is being held in a high security bloc of a New York prison while he awaits trial on charges including conspiring to supply arms to a Colombian terrorist group and kill U.S. nationals. He denies all the charges against him.

The alleged arms dealer, dubbed "The Merchant of Death," could face anything from 25 years to life in prison if found guilty.

Bout's spouse said the trial against her husband was being used by the U.S. authorities to distract public attention away from "real foreign policy problems," including Afghanistan and Iraq.

"This is just a manipulation, a big political game," she said.

Alla Bout also complained that the U.S. media was spreading lies about her husband's case. She said reports that Viktor Bout has bank accounts in the United States were untrue and part of a political myth being created around her husband.