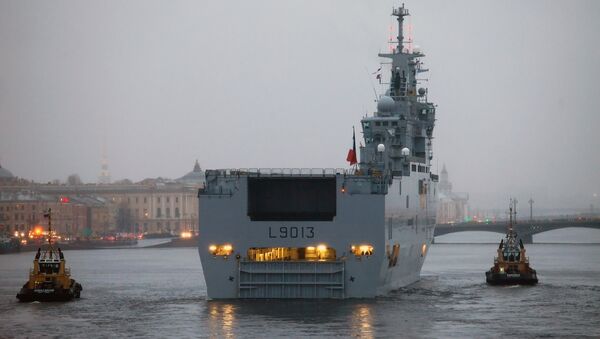 Moscow and Paris on Tuesday signed an agreement to jointly build Mistral-class helicopter carriers for the Russian Navy.

Moscow and Paris on Tuesday signed an agreement to jointly build Mistral-class helicopter carriers for the Russian Navy.

In all, four warships are to be built, Sechin said.

Russia's input to the construction of the first Mistral-class warship will be 20% and 40% in the second, he said.

The third and fourth ships are to be built in Russia, whose share of labor input will subsequently rise to 80%, he added.

Anatoly Saikin, head of Russia's arms export monopoly Rosoboronexport, said the agreement is only a framework and stipulates neither deadlines, nor the cost of the future contract.

"A contract is still a long way off. Only an intergovernmental general agreement has been signed," he said.

Russia and France in December announced they would jointly build two Mistral-class helicopter carriers at the STX shipyard in Saint-Nazaire, France. Another two are planned to be constructed later at the Admiralty Shipyards in St. Petersburg.

A Russian Defense Ministry source said in December the first Mistral-class ship, with a price tag of 720 million euros, is expected to be built in late 2013-early 2014 and the second in late 2014-early 2015.

A number of Russia's neighbors have expressed concern over the upcoming deal, in particular Georgia and Lithuania.