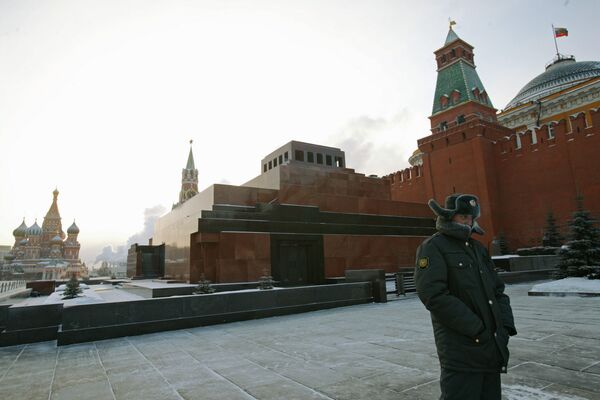 © RIA Novosti . Sergei Pyatakov
/
Go to the photo bank
Subscribe
On the eve of the 87th anniversary of Vladimir Lenin's death Russia's ruling United Russia party has yet again raised the issue of burying the leader of the 1917 October Revolution.

On the eve of the 87th anniversary of Vladimir Lenin's death Russia's ruling United Russia party has yet again raised the issue of burying the leader of the 1917 October Revolution.

Lenin died on January 21, 1924, but despite his stated wish his corpse was embalmed and placed in a specially built mausoleum on Moscow's Red Square. Over the years of Soviet rule, crowds of Soviet citizens and delegations from Communist-friendly countries visited the shrine.

However, proposals that Lenin's mummy should be removed from the heart of Moscow arose immediately after the dissolution of the Soviet Union and in the two decades since discussion of the issue traditionally flares up prior to all of the memorable dates of Lenin's life.

"Lenin is an extremely controversial figure and his presence...in the heart of our country is an absurdity," United Russia deputy Vladimir Medinsky said in comments on the party website.

He said only about 10 percent of the revolutionary's original body has been preserved over the years. "The rest was ripped up and replaced long ago."

Deputy Robert Shlegel agreed with Medinsky: "His hands are covered in the blood of millions of Russians, he is a symbol of social disruptions and terror, a symbol of the grief that was suffered by the huge country."

The Liberal Democrats also stand for a burial, but for a different reason. "Merely on Christian and humane considerations his [Lenin's] body should lie in the ground," said Igor Lebedev, a leader of the Liberal Democratic Party of Russia.

And as tradition dictates, the Communists slammed the calls to burry Lenin's mummy. "I do not understand these proposals, which come from the right and from United Russia. It looks like they can not find any other work," Communist deputy Viktor Ilyukhin said.

Gennady Gudkov, member of the A Just Russia party also took a stand against the proposal. "Prices grow, electricity cables snap, fires burn, and we have not carried out reforms yet. Do we really have nothing to do except dip into the discussion of whether to bury [Lenin's mummy] or not?"

"For a portion of Russian people, Lenin is a kind of icon," Gudkov said. "The rights of the minorities and their religious feelings must be respected."

The discussion seems set to continue for some time as the opinion of Russia's top leadership remains non-committal. Prime Minister Vladimir Putin said in 2010 that the time when the Russian people decide on the fate of Lenin's mummy is still to come, adding that history shows a strong dislike for haste and disturbances.