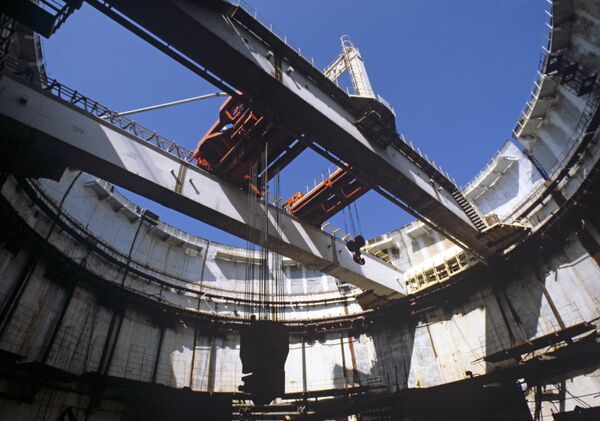 © RIA Novosti . A.Solomonov
/
Go to the photo bank
Subscribe
Russia and Belarus will sign a long-discussed agreement to build a nuclear power plant in Belarus in the first quarter of 2011, the Belarusian prime minister said on Thursday.

Russia and Belarus will sign a long-discussed agreement to build a nuclear power plant in Belarus in the first quarter of 2011, the Belarusian prime minister said on Thursday.

The signing of the agreement has been repeatedly delayed. Belarus has asked Russia for a $9 billion loan to cover both the construction costs and the social infrastructure. Russia has given no clear response, saying it wants 50% of profit from power sales of the plant.

"The basic agreement will be signed in the first quarter of this year," Belarusian Prime Minister Mikhail Myasnikovich said at a news conference following talks with his Russian counterpart, Vladimir Putin. He added that Belarusians would be actively involved in the project.

Belarus, which was one of the countries most affected by the 1986 Chernobyl nuclear disaster, plans to build the plant in its western Grodno region, with the first reactor expected to be put into service in 2016 and the second in 2018.

Myasnikovich said the sides still had to agree on the price and timeframe of the plant, which is expected to meet 27-28% of the country's electricity demand.

The nuclear power plant will have a capacity of 2,000 MW and will be built by Russia's nuclear power equipment and service export monopoly Atomstroyexport.

Belarusian officials have threatened to involve contractors from other countries, including China and the United States, if no agreement is reached with Russia on the loan.