Putin to discuss release of detained Russians with Belarus PM 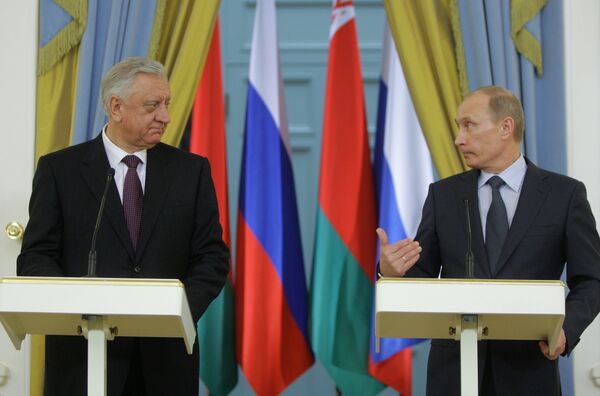 Prime Minister Vladimir Putin said on Thursday he would discuss the release of Russian citizens arrested in Belarus with his Belarusian counterpart Mikhail Myasnikovich.

Two Russians remain in custody in Belarus for alleged participation in mass protests following the disputed December 19 presidential polls. They face up to 15 years in prison if convicted.

"I will discuss this issue with my Belarusian colleague in private after the news conference," Putin told reporters following talks with Myasnikovich.

"But as far as I am concerned, the Russian parliament will not adopt any statements, or resolutions, or other documents [regarding the arrests]," Putin added.

Over 600 people, including opposition candidates, journalists and human rights activists, were beaten and detained as riots followed the re-election of Lukashenko in a poll described by Western observers as "flawed."

Earlier on Thursday, the European Parliament voted to impose sanctions against Lukashenko and his top aides involved in post-election beatings and arrests.