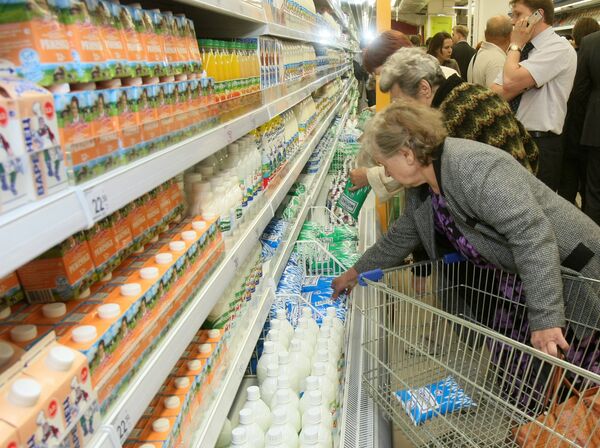 In an unusual protest against widespread poverty in Russia, a 17-year-old student from the Urals city of Yekaterinburg is testing the state-defined minimum cost of living by eating for just $88 for one month.

In an unusual protest against widespread poverty in Russia, a 17-year-old student from the Urals city of Yekaterinburg is testing the state-defined minimum cost of living by eating for just $88 for one month.

Vitaly Nikishin decided to embark on his project after the government announced its revised minimum food basket price estimate in late December. Inflation pushed the figure for the Sverdlovsk Region up 22.7 percent year-on-year, but the minimum a person can spend on food a month is still defined as a paltry 2,626 rubles ($87.50).

"These findings seemed absurd to me and I decided to do something, you could call it a hunger strike, to attract the public's attention to a pressing social problem: the problem of poverty in our country," Nikishin says on his blog at http://minproduct.ru/.

The blog gives a day-by-day account of how the teenager is coping with his unusual diet. It includes photographs and descriptions of each of his modest meals; how they taste and how filling they are. Nikishin also regularly records his weight, which has already dropped by 2 kg since the start of the experiment.

The project has attracted a mass of followers in the Russian blogosphere and extensive media coverage. Nikishin says he gives interviews about the experiment practically every day.

The publicity surrounding the project has even forced the regional government to respond, with local officials admitting that the estimate is unreasonable.

"The minimum cost of living for a pensioner is 4,813 rubles [$160] a month, which works out as about the same for food a day as it does to feed a dog. That's how it is. The region spends more money feeding dogs than it does feeding pensioners," regional assembly member Andrei Alshevskikh told the Vesti TV channel.

Officials also admit, however, that there is very little that can be done to resolve the issue as raising the minimum would cause more people to fall below the poverty line and there is no room in the regional budget to dish out an increased number of social benefit payments.

The Federal State Statistics Service, Rosstat, says the minimum food basket is an abstract figure used to calculate where the poverty line begins, and should not be taken literally.

About 13 percent of the Russian population (19 million people) currently lives under the state-defined poverty line. Nikishin's project sets out to prove that the real poverty line is much higher.

Food prices have been steadily rising in the country since wildfires and the worst drought in decades triggered short grain supplies last summer. Federal Statistics Service data released on January 5 showed a 12.9 percent increase in the price of food products in 2010.

With parliamentary and presidential elections coming up in 2011 and 2012, the government is struggling to hold back the rising prices amid fears of social unrest. Grain exports have been banned since the summer but the Russian Central Bank warns that prices will continue to rise in the coming months.

At the end of the experiment, Nikishin says he will compile a report from his blog and media coverage of his project. He plans to send the document as a petition to the regional and federal authorities in the hope that it will force them to address the issue of poverty in Russia.

"Through my project I am first and foremost supporting anyone who has to survive year after year on the paltriest sums of money; my fellow citizens who use all their strength just to survive," Nikishin says.