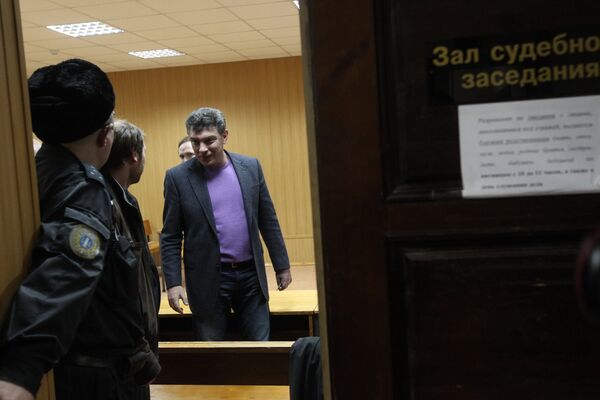 A lawmaker in Russia's lower house of parliament, the State Duma, has requested Prosecutor General Yury Chaika to investigate whether opposition leader Boris Nemtsov is being funded by foreign sources.

A lawmaker in Russia's lower house of parliament, the State Duma, has requested Prosecutor General Yury Chaika to investigate whether opposition leader Boris Nemtsov is being funded by foreign sources.

Nemtsov was arrested after an anti-Kremlin rally on Moscow's Triumfalnaya Square on New Year's Eve and sentenced to 15 days in jail for "disobeying police instructions."

"A minor crime has brought forth an unimaginable wave of critical statements from several American governmental and political figures, in particular abrupt condemnation of the Russian government in regard to Nemtsov's arrest was stated by spokesman of the United States' National Security Council Mike Hammer, as well as by U.S. Senators [John] McCain and [Joe] Lieberman," A Just Russia party member Anton Belyakov stated in his inquiry to the Prosecutor General.

Belyakov said that Nemtsov's recent activities that include public marches, involvement in election campaigns, trips abroad, and participating in the creation of a new political party, as well as" the great interest in him as a person by foreign politicians, foreign governmental and non-governmental organizations call forward the issue of its legal base in regard to the sources of financing Nemtsov in these activities."

Financing for the creation or in the activities of Russian political parties by foreign entities, including by private individuals or legal entities, is illegal according to Russian law.

"I request you investigate if foreign financial sources have been used in Nemtsov's activities as well as in creating his political party For Russia Without Tyranny and Corruption, and if such incidences are revealed to take appropriate actions through the Prosecutor General's Office," Belyakov said in his inquiry.

Nemtsov was arrested with around 70 others during an unsanctioned rally that broke out after the regular, sanctioned, March of Dissent meeting on December 31.

The March of Dissent rallies take place in Moscow and St. Petersburg on the last day of every month with 31 days, in honor of Article 31 of the Russian Constitution, which guarantees the right to free assembly.