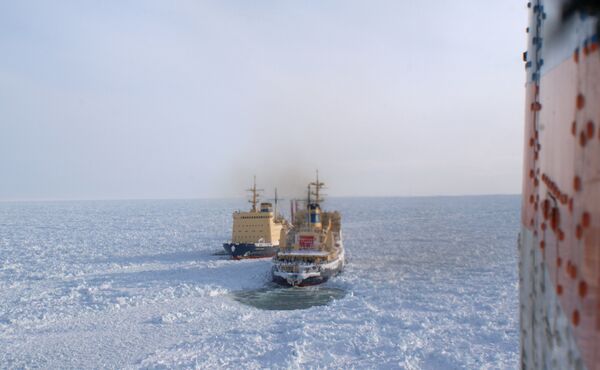 The fishing ship with about 300 people on board has been stranded in heavy ice in the Sea of Okhotsk for two weeks.

The Admiral Makarov and Krasin started towing the vessel on Wednesday afternoon, but towing ropes snapped soon after the start of the operation. The rescue resumed on Thursday morning.

"The convoy has covered 17 miles since the beginning of the rescue operation, and will reach the Bereg Nadezdy refrigerator ship after another eight miles," spokeswoman Tatyana Kulikova said. "After the meeting with the refrigerator, they will face a very difficult stretch of ice floe before reaching clear waters."

According to the rescue plan, the icebreakers will continue towing the Sodruzhestvo, while the Bereg Nadezhdy will attempt to sail on its own along the channel cut in the ice by Admiral Makarov and Krasin.