Court to hand over verdict copies to Khodorkovsky defense 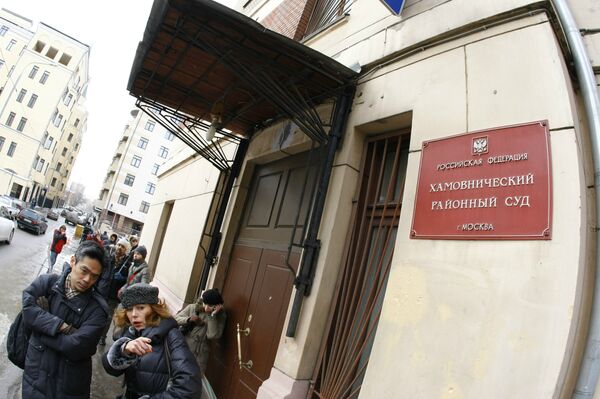 © RIA Novosti . Ruslan Krivobok
/
Go to the photo bank
Subscribe
Moscow's Khamovniki District Court will give copies of the verdict in the second trial against Russian ex-oil tycoon Mikhail Khodorkovsky and his business partner Platon Lebedev to their lawyers on Friday.

Moscow's Khamovniki District Court will give copies of the verdict in the second trial against Russian ex-oil tycoon Mikhail Khodorkovsky and his business partner Platon Lebedev to their lawyers on Friday.

"The court has already prepared copies of the verdict for all participants of the trial and is planning to hand them over on Friday," court's spokesperson Natalia Vasilyeva said.

She insisted that the court had not violated the 5-day requirement by law to complete this procedure.

"The court finished the announcement of the verdict on December 30, 2010, and must release its copies within five days after the announcement, but the holiday season does not count toward this time limit," Vasilyeva said.

The Russians enjoyed 10 days of New Year holidays until January 11.

Vasilyeva also dismissed allegations by Khodorkovsky's lawyers that they had not received copies of transcripts of court sessions in the trial held in 2010.

"The defense was given copies of five transcripts, totaling 6,000 pages. Another set of transcripts will be given to all participants in the near future," she said.

On December 30, the court sentenced Khodorkovsky and Lebedev to a total of 14 years in prison in a second trial involving Yukos assets. The two men, who already spent seven years in jail for fraud and tax evasion from their 2005 trial, could remain behind bars until 2017.

Khodorkovsky and Lebedev have repeatedly denied the charges, saying they were politically motivated.

Many Western countries and organizations, including the United States and the European Union, have condemned the verdict as harsh and unfair, and expressed concern over the fact that the judicial system in Russia has shown no signs of improvement despite President Dmitry Medvedev's pledge to make it just and transparent.

Khodorkovsky and Lebedev's lawyers have already appealed the verdict.