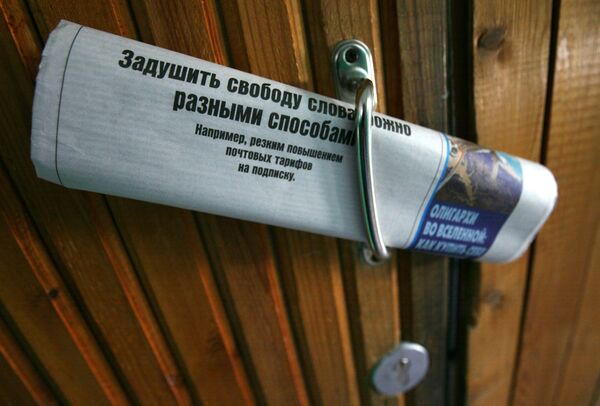 © RIA Novosti . Valeriy Titievskiy
/
Go to the photo bank
Subscribe
The world is facing a decline in political rights and civil liberties, the global pro-democracy group Freedom House said on Thursday in its annual report.

The world is facing a decline in political rights and civil liberties, the global pro-democracy group Freedom House said on Thursday in its annual report.

Freedom in the World 2011 analyzes changes in the state of political and civil rights observed in 2010 and gives each country a freedom status - Free, Partly Free, or Not Free.

In 2010, the Washington-based nongovernmental organization said, 25 countries showed significant drops in key democracy factors and the number of "free" countries decreased from 89 to 87.

Russia was described as an "authoritarian regime" in the report along with China, Egypt, Iran and Venezuela, where governments continued to ramp up repressions.

"This should be a wake-up call for all of the world's democracies," said David Kramer, executive head of Freedom House. "Our adversaries are not just engaging in widespread repression, they are doing so with unprecedented aggressiveness and self-confidence, and the democratic community is not rising to the challenge."

According to the report, among the outrageous anti-democratic events that took place in 2010 were Russia's "blatant disregard for judicial independence" in the case of former oil tycoon Mikhail Khodorkovsky and the crackdown on opposition protesters in Belarus after the rigged presidential elections.

"It is often observed that a government that mistreats its people also fears its people," Freedom House director of research Arch Puddington said. "But authoritarian regimes will have a much freer hand to silence their domestic critics if there is no resistance from the outside world. Indeed, if the world's democracies fail to unite and speak out in defense of their own values, despots will continue to gain momentum."