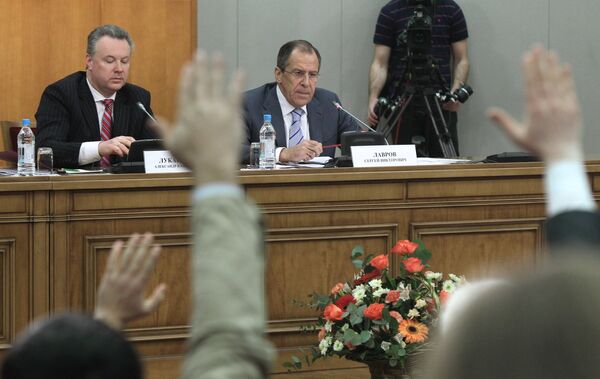 Russia, the United States, Canada, Denmark and Norway are seeking to assert jurisdiction over parts of the Arctic, which is believed to contain over 25% of the world's oil and gas deposits.

The vast hydrocarbon deposits will become more accessible as rising global temperatures lead to a reduction in sea ice.

"Any problems in the North, including the problems of demarcating maritime territory, are subject to political and judicial solutions and that's why rumors that a war will break out over the resources in the North are a provocation," Lavrov said at the 2010 summary press conference.

Russian Prime Minister Vladimir Putin also relayed concerns in the fall of a battle for Arctic territory by saying that partnership agreements would settle all border disputes in the region.

In September, Russia and Norway signed a deal to delimitate their maritime border after 40 years of negotiations. The two countries have been disputing the 175,000 square km area in the Barents Sea and Arctic Ocean since 1970. The absence of a defined maritime border often resulted in the seizing of fishing vessels in the region.

Meanwhile, Russia is still in a dispute with Canada over the Lomonosov Ridge, with both countries trying to persuade a UN commission that it is an extension of its own continental shelf. The sides have agreed that scientific evidence should resolve the dispute.