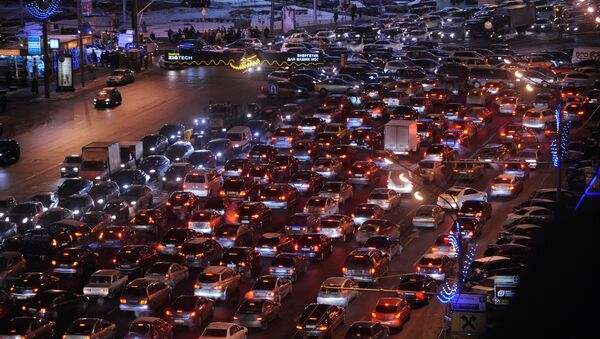 Moscow's traffic jams are among the worst in the world and cost the state 40 billion rubles ($1.3 billion) every year, according to experts.

The city traffic grinds to a halt when the number of cars in the center exceeds 400,000.

Every day there are up to 3 million cars in Moscow, home to an estimated 16 million people, and the number of vehicles is growing.

"A car is property and property is responsibility," said Alexander Sarychev, who heads Moscow's institute for transport and road facilities.

He pointed at the example of Japan and China, where car owners are obliged to buy a parking place for their car in order to register it.

The chronic lack of parking places in Moscow means drivers are often forced to park on the edges and sidewalks of the already busy downtown roads, adding to the traffic chaos.

President Dmitry Medvedev has said he will personally oversee the efforts. He earlier said the elimination of Moscow's traffic jams was a "viability test" for the federal government and a key to making the capital a world financial hub.